Posted on November 8, 2018 by tonyaspler 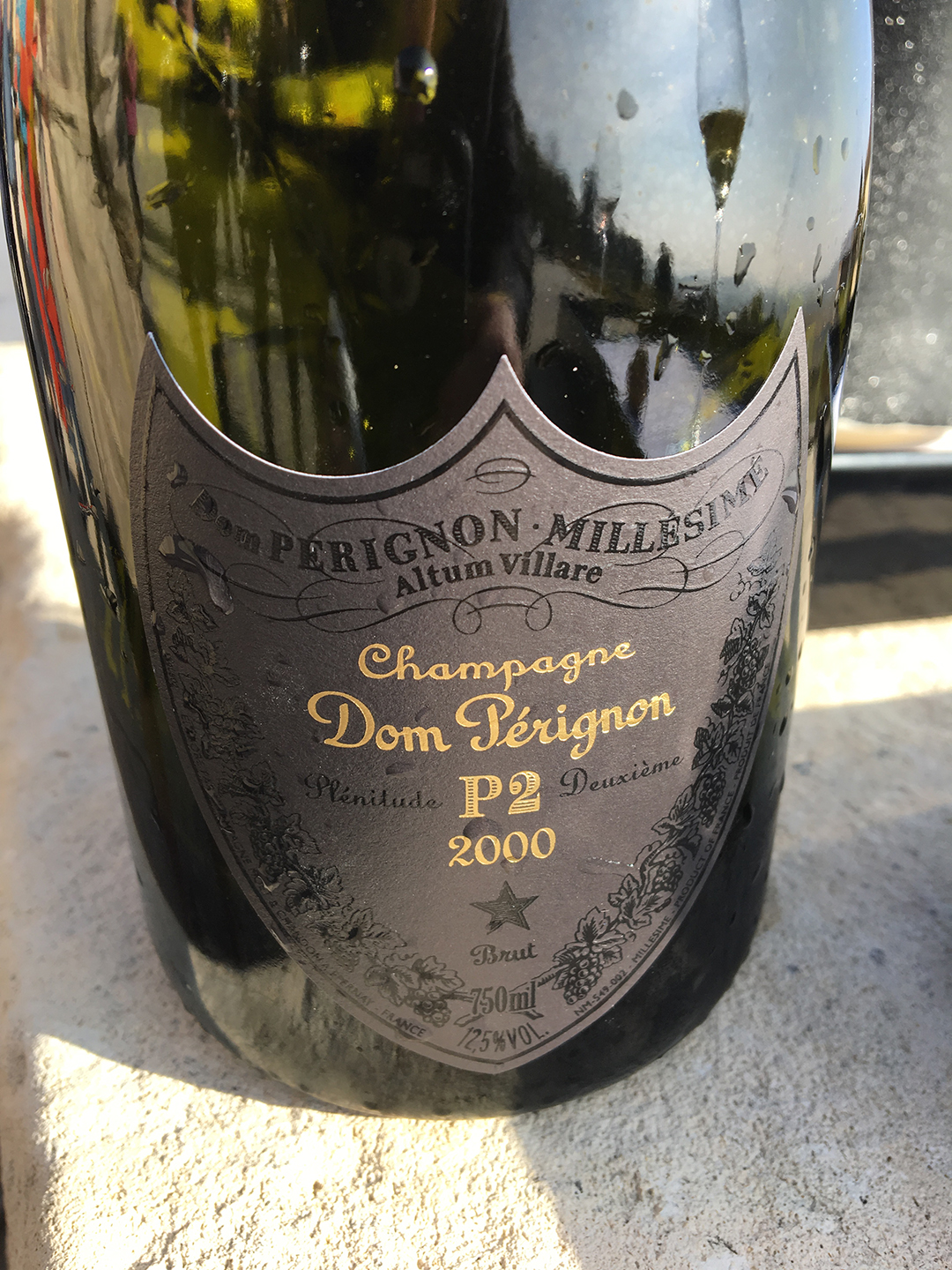 Just the job after an overnight flight

We were met by Leslie, the wonderful lady who drove us around the Loire Valley in May. She took us to our hotel, the Relais & Chateaux Hostellerie La Briqueterie, where we will stay for the next three nights. The hotel is a former brickworks factory that has been transformed into a luxurious country retreat, located in the vineyards just outside the town of Épernay. 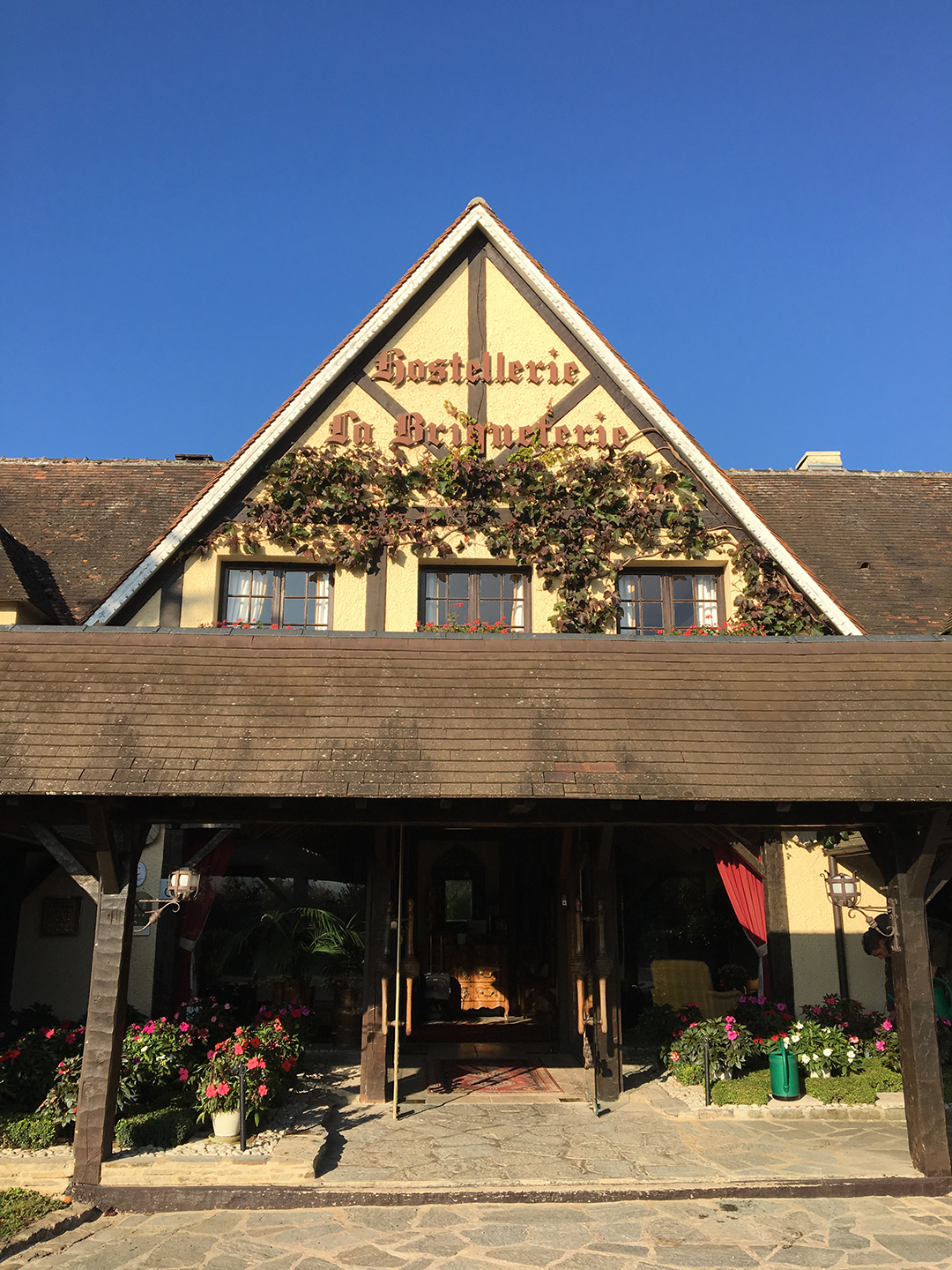 Since our rooms would not be ready, Moët & Chandon generously invited us to enjoy our visit to their Hautvillers property for a tour and a glass of Dom Pérignon 2009 on the terrace beside his former abbey church while enjoying a spectacular view of the Champagne countryside! Dom Pérignon’s dates coincide exactly with those of Louis IV, the “Sun King” (1639–1715), though it’s debatable as to who shed the most sunshine.

The Abbey of Hautvillers

A light canapé lunch awaited us at the hotel – foie gras, quails’ egg and caviar on avocado blinis, smoked salmon in trencherman slices, all washed down with Champagne Bouché Cuvée Réservé Brut.

A much-needed two-hour sleep before dinner at the nearby Royal Champagne Hotel.

Stairwell in the Royal Champagne Hotel

Sunset over the Royal Champagne Hotel

Sunday, October 21st: After breakfast we bussed to Moët et Chandon, walking down the Avenue de Champagne past a series of beautiful old champagne houses. We toured the building and were briefed on its history (founded in 1743 by Claude Moët, supplier to the royal court and favourite wine of Madame de Pompadour who is said to have remarked, “Champagne is the only wine in the world that makes a woman more beautiful after drinking it.”)

Door on the Avenue de Champagne

Eighty percent of Moët’s production is exported and a bottle of their bubbly is opened somewhere in the world every second, apparently. We walked a minute part of the 18 miles of their cellars on three levels that date back to the eighteenth century. The oldest bottle in the reserve cellar dates back to 1869. Before lunching at the Orangerie, we were served a glass of Brut Imperial.

The champagne is served 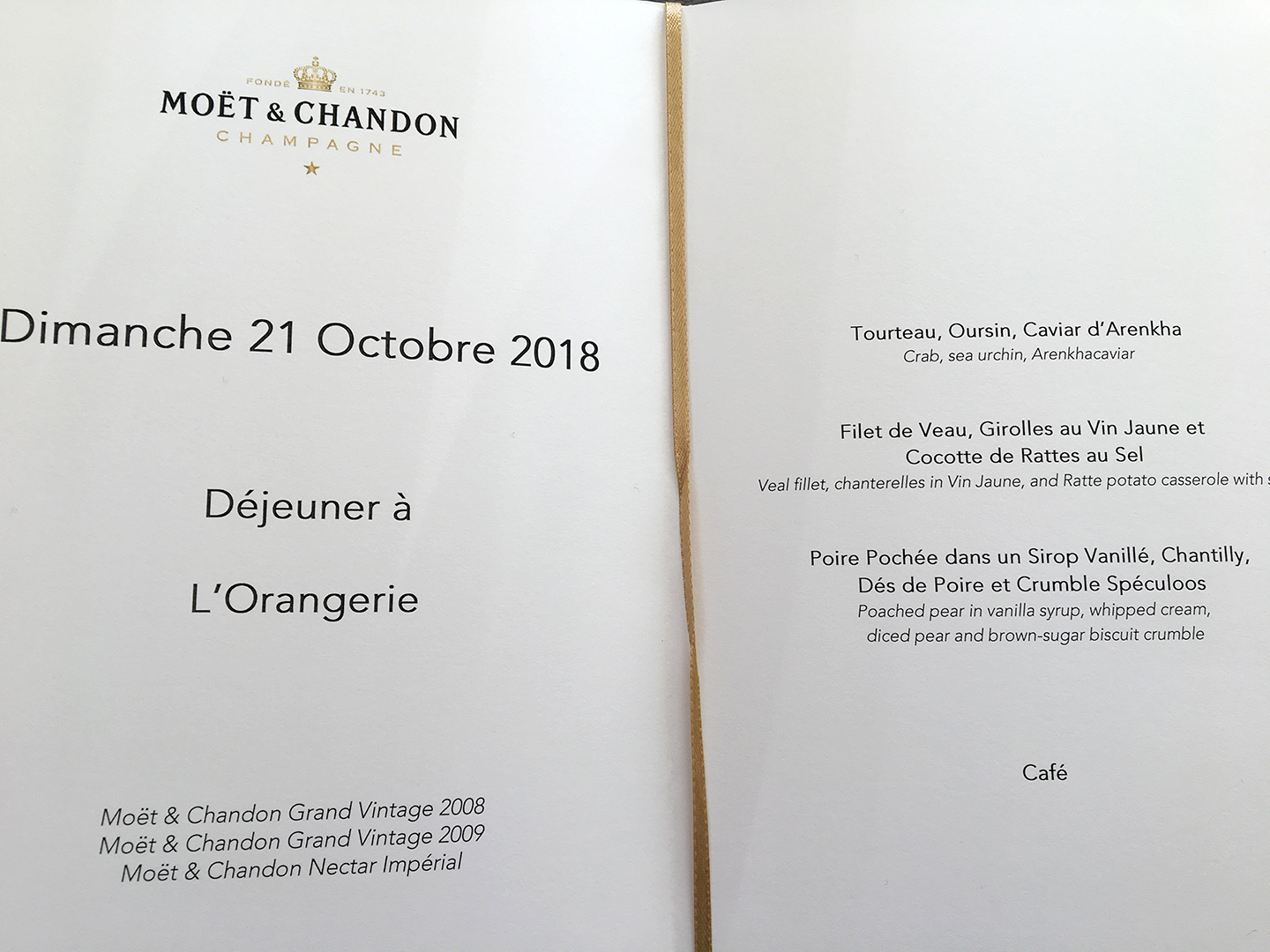 After lunch we drove back to Hautvillers (population 900) and settled into a wine bar called Au 36… on rue Dom Pérignon, where we demolished several bottles of Drappier Brut Natur and Champagne Vilmart with plates of charcuterie before returning to the hotel. I retired to the room to work on this blog while the group headed for the bar and dinner.

Drappier champagne in its own standing cooler

Monday, October 22nd: First visit day is to Pol Roger, Winston Churchill’s favourite champagne and the smallest of the grand marque houses, founded in 1849 by 17-year-old Pol Roger. The house has 18 miles of cellars, part of which collapsed in 2000, crushing hundreds of thousands of bottles. Today they produce 1.6 to 1.8 million bottles, all still riddled by hand, even the magnums. They own 92 hectares of vineyards. At the end of the tour we tasted Pol Roger Blanc de Blancs 2009, Rosé 2009 and Winston Churchill Brut 2008, which had spent 10 years on the lees.

Lunched at the three-star L’Assiette Champénoise in Rheims. An amazing meal topped off with a delicious tangerine dessert executed in white chocolate. The final cheese course was served with a “spork” – half spoon half fork, invented by a Frenchman while on a camping trip in Canada and named for his girlfriend, Georgette. 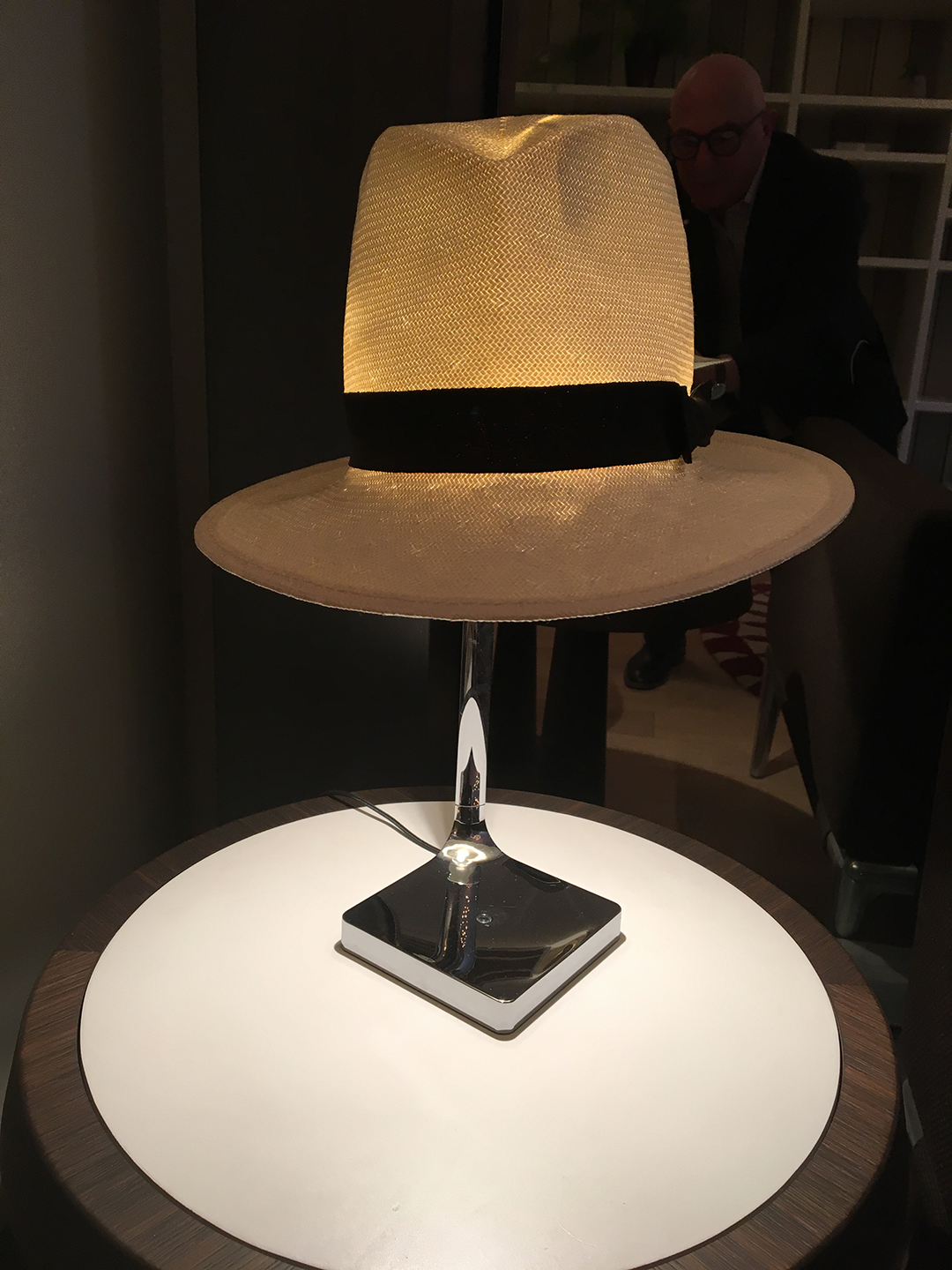 After lunch we walked around Reims Cathedral to see the Chagall stained glass windows before returning to the hotel. No dinner necessary.

Tuesday, October 23rd: This morning we visited Salon in Mesnil-sur-Oger, a unique champagne house that produces only one wine – their legendary blanc de blancs. Owned by Delamotte, they produce a mere 60,000 bottles (and only in exceptional years – 37 vintages in the last 100) which spend ten years in their cellar before release. The 2008 vintage will only be bottled in magnums. Here we tasted Delamotte Brut, Delamotte Blanc de blancs, Salon 2008 and Salon 2007. On the bus we opened a magnum of Moët & Chandon graciously provided by Joe Canavan and a bottle of Larmandier-Berner L’Altitude.

Bussed from Champagne to Burgundy and lunched at a truck stop on the highway (had a delicious andouillette) and then stopped in at the Château du Clos de Vougeot, home of the Confrérie des Chevaliers du Tastevin, en route to Beaune. Checked into our hotel for three nights: L’Hôtel de Beaune  (lhoteldebeaune.com), perfectly situated right in the heart of the medieval town centre.  My room is two flights up over the hotel’s restaurant – which turns out to be a good thing because of an extraordinary fulsome meal we are having this evening.

But before that, a tasting in a private room one flight below my room: Domaine Jessiaume, conducted by winemaker William Waterkeyn.

At dinner downstairs for a menu of Burgundian specialties: amuse-gueule of pear purée on a mousse of foie gras, sashimi de saumon, poached eggs slathered with black truffles, and the pièce de résistance – poulard de Bresse rôtie (which was so good I forgot to write down the dessert). The wines: 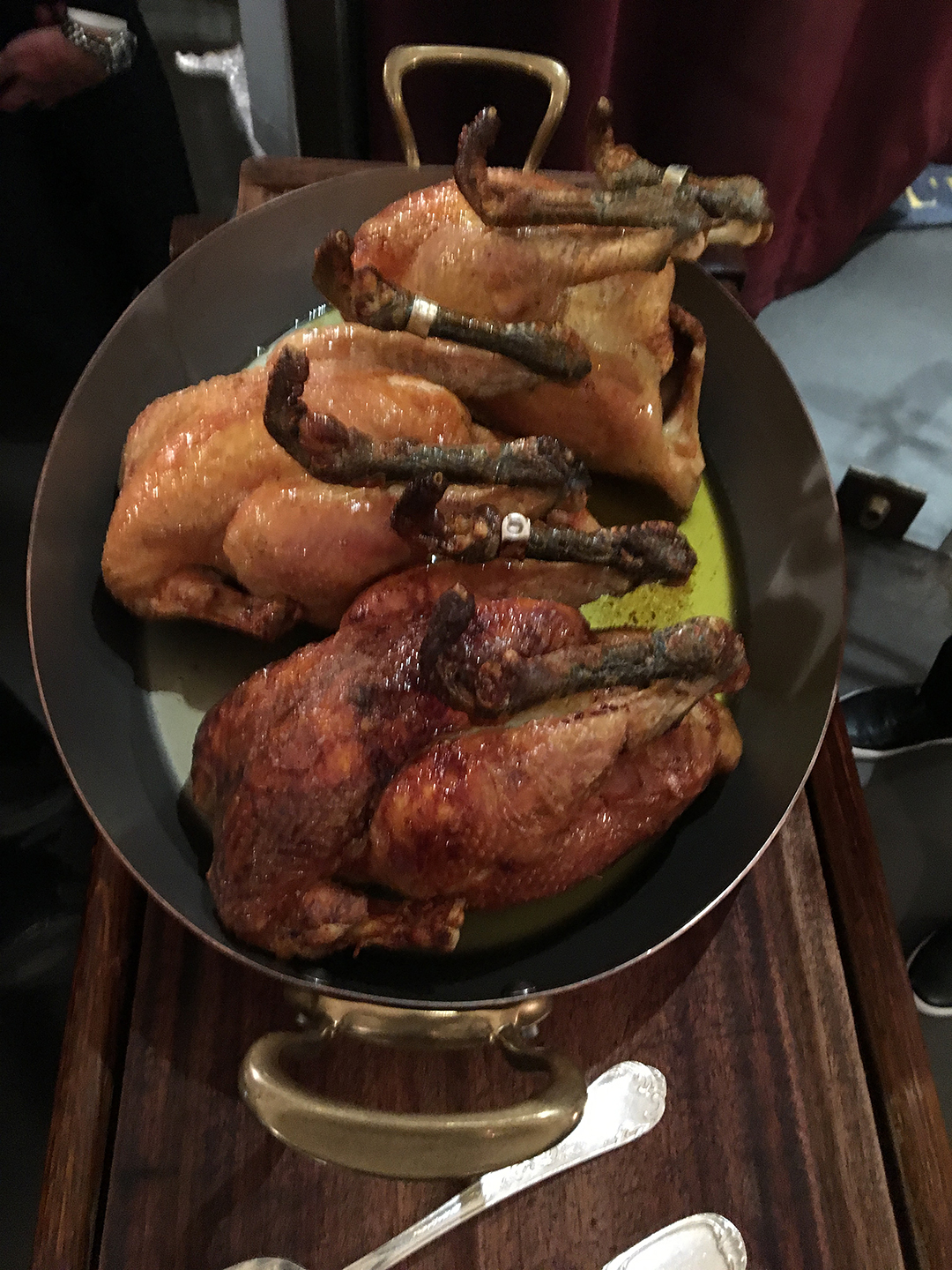 Wednesday, October 24th: This morning a guided tour of the Hospices de Beaune, commissioned in the 15th century to support the town’s inhabitants, who had suffered greatly in the wake of the Hundred Years War. This architectural jewel served as a hospital right up until 1971 and is now a museum and art gallery. The hospice has also become the proprietor of a large number of the best vineyards in Burgundy, whose wines are auctioned off by the barrel in a famous auction each November. The exceptional tiled roof is executed in the seasonal colours of the vineyards that used to surround it. We ended the tour with a glimpse of Roger van der Weyden’s masterwork, The Day of Judgement.

We then toured part of Bouchard Père et Fils’ four kilometres of cellars, which run deep beneath the Château de Beaune, a former royal fortress built in the 15th century by King Louis XI. The company (part of the Champagne Henriot group) owns 30 hectares of Grands Crus and 74 hectares of Premiers Crus vineyards, making it the largest landowner in the Côte d’Or.  The château was built as a fortress in 1478. In the cellars, 10 metres below ground, are two million bottles and the largest collection of old Burgundy in the world – some 360,000 bottles. The oldest in the collection is an 1846 bottle of Meursault-Charmes. Bouchard’s signature wine, Beaune de Château, is a blend of 17 Premiers Crus. We tasted a range of Bouchard wines in a crypt-like tasting room:

Then we lunched in Bouchard’s orangerie with Luc Bouchard. 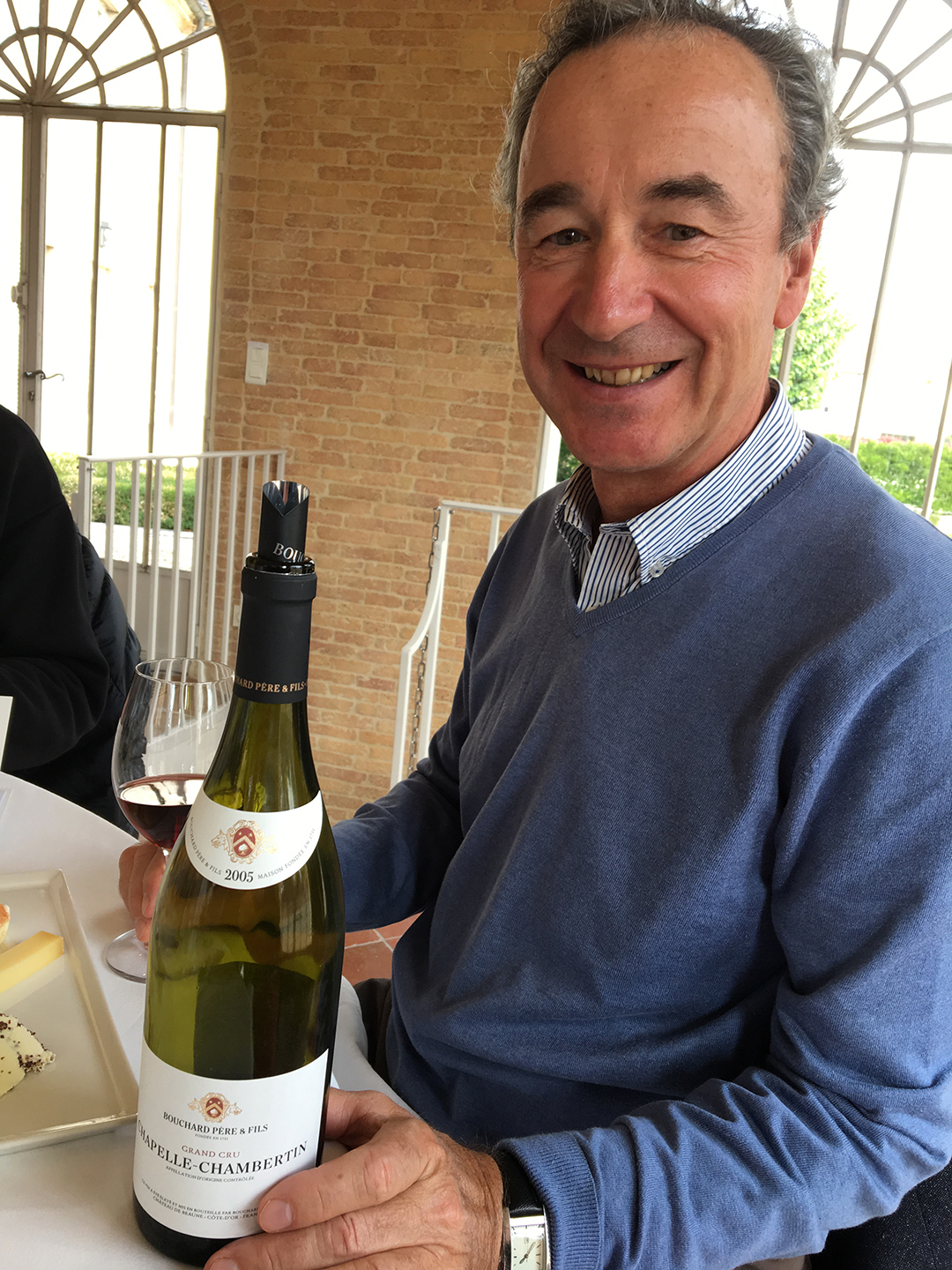 Our next stop was Remoissenet, which was a highlight ten years ago when the ebullient Bernard Repolt took us down to the ancient cellar and began pulling bottles of some of our birth years. Bernard was caught up with banking business and his cellar master conducted a rather desultory tasting of the following wines: 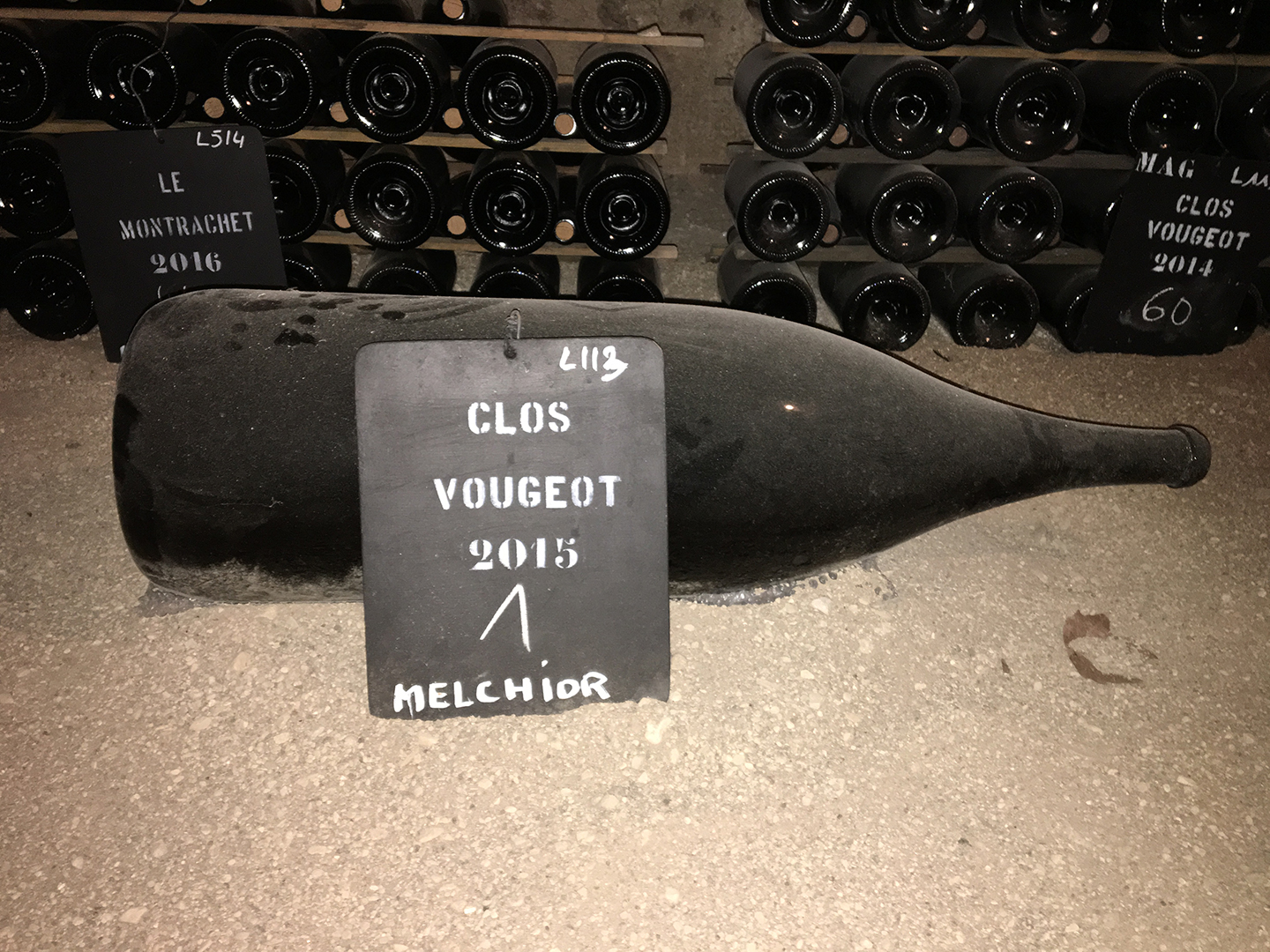 Thursday, October 25th: A mid-morning appointment at grower-producer Domaine A.F. Gros (af-gros.com) near the village of Pommard. Unfortunately, the owner, Caroline Gros-Parent, couldn’t be with us but she proposed the following visit.

“Walk (it turned out to be a long walk!) in the vineyard of Pommard (where we watched vines being torn out to be replanted) – followed by a tasting at the winery.

“A discovery of the notion of terroir with wines from the generics up to grand crus, showing the diversity of the appellations. The 3 Pommard 1er cru visited earlier in their respective vineyards, can be presented in 2 different vintages so that your guests learn about the difference in the vintages.”

The Richebourg, which we took to lunch at Aupres du Clocher (aupresduclocher.com) restaurant in Pommard, was, unfortunately corked; but a second bottle was brought from the winery. 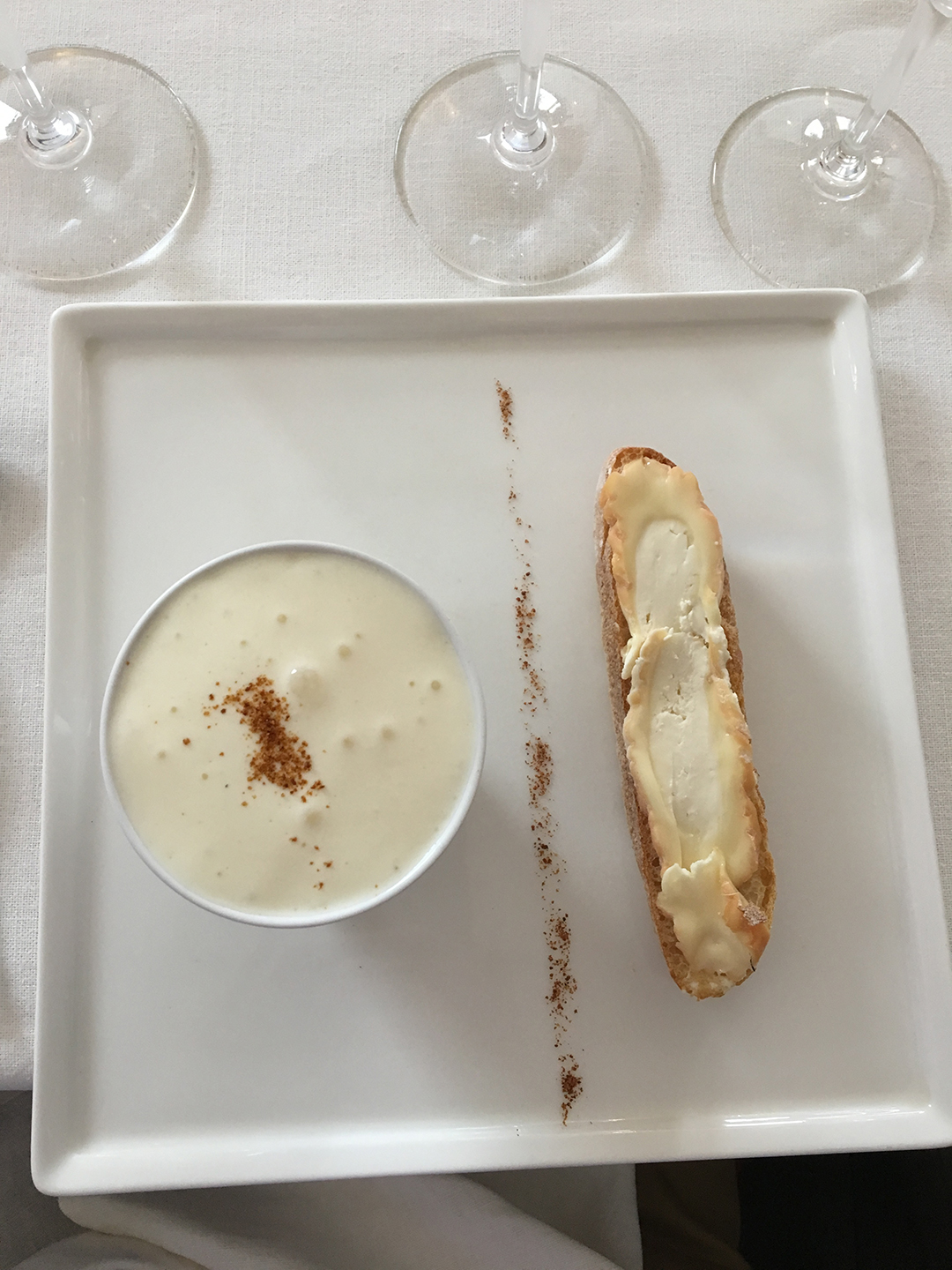 The most delicious Époisses dish

Afternoon visit to Maison Jadot in Beaune. Jadot owns 33,000 hectares in Burgundy (including 2 hectares of the Clos Vougeot) and 120,000 ha. in Bordeaux. And they also own the Tonnellerie Cadus where all their barrels are made. They have a stunning number of  labels – 150 in total. After a tour of the cellars we tasted the following 14 wines:

Back to the hotel. No dinner for me.

Friday, October 26th: Departure from Beaune this morning, northwest into the Yonne river valley towards Chablis, the northernmost satellite wine district of Burgundy. Our final tasting visit of the tour is with exceptional Chablis producer William Fèvre (williamfevre.fr). But on the way we stopped in the village of Vézelay with its eccentric but beautiful abbey, and a bakery that sells the world’s largest gougères.

Tasting at William Fèvre in the village of Chablis:

Menu: Amuse-gueule of vegetable soup; snails in garlic and parsley rolled in a breadcrumb batter; filet of beef and beef tartare; Montblanc with cream and chocolate; cheese tray (dozens of cheeses to choose from).

The wines: William Fèvre Petit Chablis 2013 (in magnum) and courtesy of Aris, a glass of Blanton’s Bourbon.

On the bus heading north to Paris, I opened a bottle of Domaine LaCroix Mont Joie L’Impatiente 2016 Bourgogne Vézelay and we finished off sundry bottles of champagne. Early evening arrival at the Sheraton Hotel within Charles de Gaulle airport for the morning’s flight to Toronto. 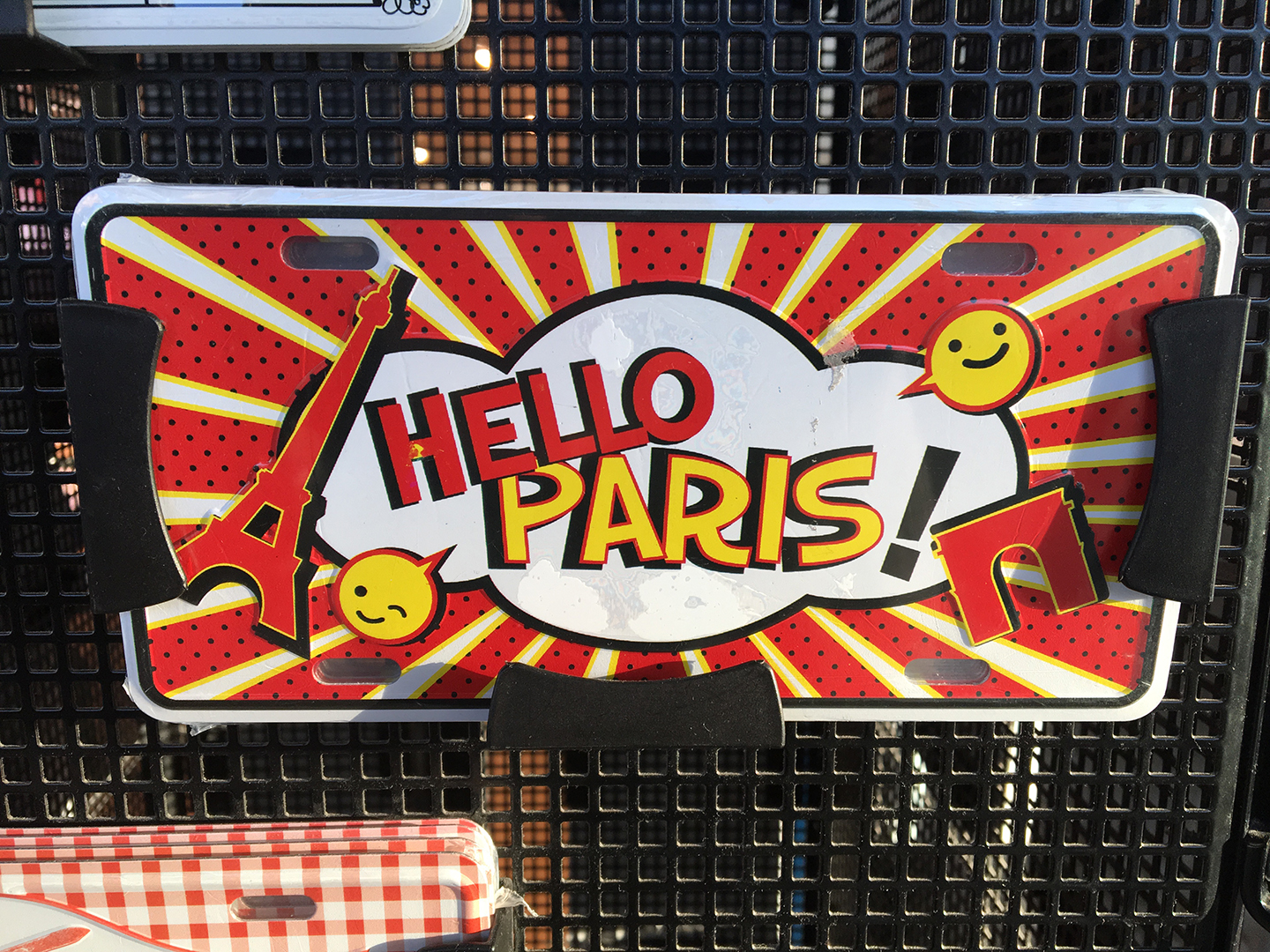