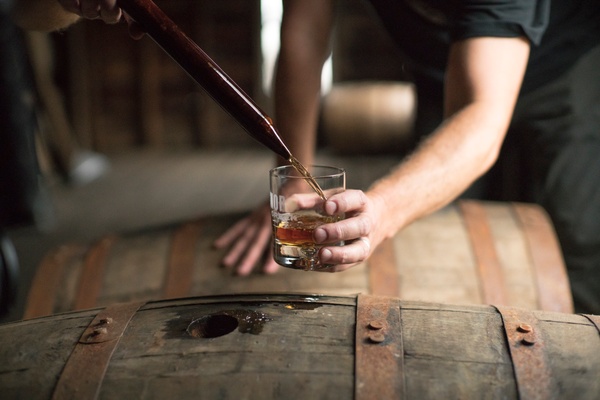 This is a guest article by Tod Stewart, contributing editor, Quench Magazine.

Though there’s nothing like travelling through Kentucky’s rolling hills, sampling bourbon as you go, enjoying great whiskey (and great food) along with some virtual friends in the dead of a frozen February is probably the next best thing.

As luck would have it, I was able to do this on two occasions. The first was in the virtual company of the father and son team of Fred and Freddie Noe (respectively) to celebrate the return of the Knob Creek 9 Year Old bourbon to the Canadian market (sporting a new look). We tasted this whiskey as well as a few others while chatting about bourbon in general and Knob Creek specifically.

Knob Creek 12 Year Old
Available at the distillery only (darn!), this limited run whiskey clearly demonstrates the impact of carefully extended wood aging on a whiskey, evidenced by smoky, brown sugar notes on the nose, along with marzipan, vanilla pod and citrus peel. Beautifully complex and balanced, it shows a distinctive grind of black pepper on the palate, along with sweet oak, new leather and candied citrus peel.

We also sampled the earthy, herbal, cedar-laced and spicy Knob Creek Rye; the assertive Knob Creek Single Barrel that offers up aromas of caramel corn, praline, dried fruits and charred oak and similar flavours, and the Knob Creek Smoked Maple, described by Fred as a “breakfast bourbon.” (Hey, it’s a pandemic, anything goes.) I’m not a huge fan of flavoured whiskies, and although this one basically smelled like maple syrup, its flavour profile is definitely that of a bourbon, with subtle maple undertones. Freddie suggested cooking with it, and I definitely think it would add something to barbecue rib sauce.

The next day, late in the afternoon, a rather spectacular dinner (and some premixed whiskey cocktails) arrived at my door courtesy of Toronto’s amazing Richmond Station restaurant. Both the food items and the cocktails were laced with another of my favourite bourbons: Woodford Reserve.

Woodford Reserve Distiller’s Select Kentucky Straight Bourbon Whisky
An elegant bourbon that shows aromatic traces of marmalade, caramel, buckwheat honey, a kiss of new oak, and a whisper of cocoa powder. The elegant stylings carry over onto the mid-weight palate. There’s a mild dash of rye spice intermingled with caramel, cinnamon, citrus peel and a dash of sweet oak that carries over onto a long, warming finish.

Woodford Reserve Double Oaked Kentucky Straight Bourbon Whisky
Fortier pointed out that this whiskey is aged for between five to seven years before being transferred into a new toasted, flash-charred barrel for final maturation. Fortier also pointed out that about 70 per cent of a whiskey’s flavour comes from the wood it’s matured in. The result is a fair bit different (in a good way) than the standard Woodford Reserve. Overall, the aromas are a shade bolder and more intense, with toasted oak, marzipan, caramel and some dark fruit notes all making an appearance. Full and assertive in the mouth, with flavours running through the gamut of sweet vanilla oak, treacle, toasted hazelnut and a dusting of spice. There’s even a bare trace of wood tannin that lends a balancing dryness that evens out the sweet oak intensity.

Woodford Reserve Kentucky Straight Rye Whisky
With just 53 per cent rye in the mashbill (legal for US rye being 51 per cent), don’t expect the brash, super-spicy, borderline aggressive style that characterizes some of the 100 per cent Canadian ryes you might be familiar with. Instead, expect a very nicely structured, user-friendly whiskey that combines the body and warmth of bourbon with a slightly amped up peppery rye component. There are some apple and honey notes, along with vanilla and baking spice flavours that linger on the finish. This is a versatile whiskey that will be great on its own or as a base for traditional whiskey cocktails.