Monday, July 16th: Deborah drove me into Toronto and dropped me off with my fishing gear at Steve Cohen’s office. We had dinner at a Chinese restaurant in the north end of the city before an early night, as we have to be up for a 7:05 am flight to Calgary.

Tuesday, July 17th: Met Alfred Kwinter at the airport and the three of us prepared to board the flight. Changed planes in Calgary for the flight to Yellowknife, where we will spend the night before the float plane ride two hundred miles north to Petersons Point Lake Lodge. Margaret Peterson met us at Yellowknife airport and dropped us off at the Explorer Hotel (with a side trip to the local liquor store, where we picked up a bottle of Allan Scott Sauvignon Blanc 2017 (New Zealand) and Cono Sur Cabernet Sauvignon Carmenère Syrah 2017, which we demolished in our hotel room with a bag of Miss Vickie’s Original potato chips). Dinner in the hotel’s dining room. The server brought the bottle of Pirramimma Petit Verdot 2014 (McLaren Vale) to the table already poured into a decanter.

Wednesday, July 18th: Margaret Peterson came to pick us up at 7 am to drive to the float plane airport, where we had our traditional al fresco breakfast of Veuve Clicquot, devilled eggs, bannock, cheese and fruit before boarding the Twin Otter. 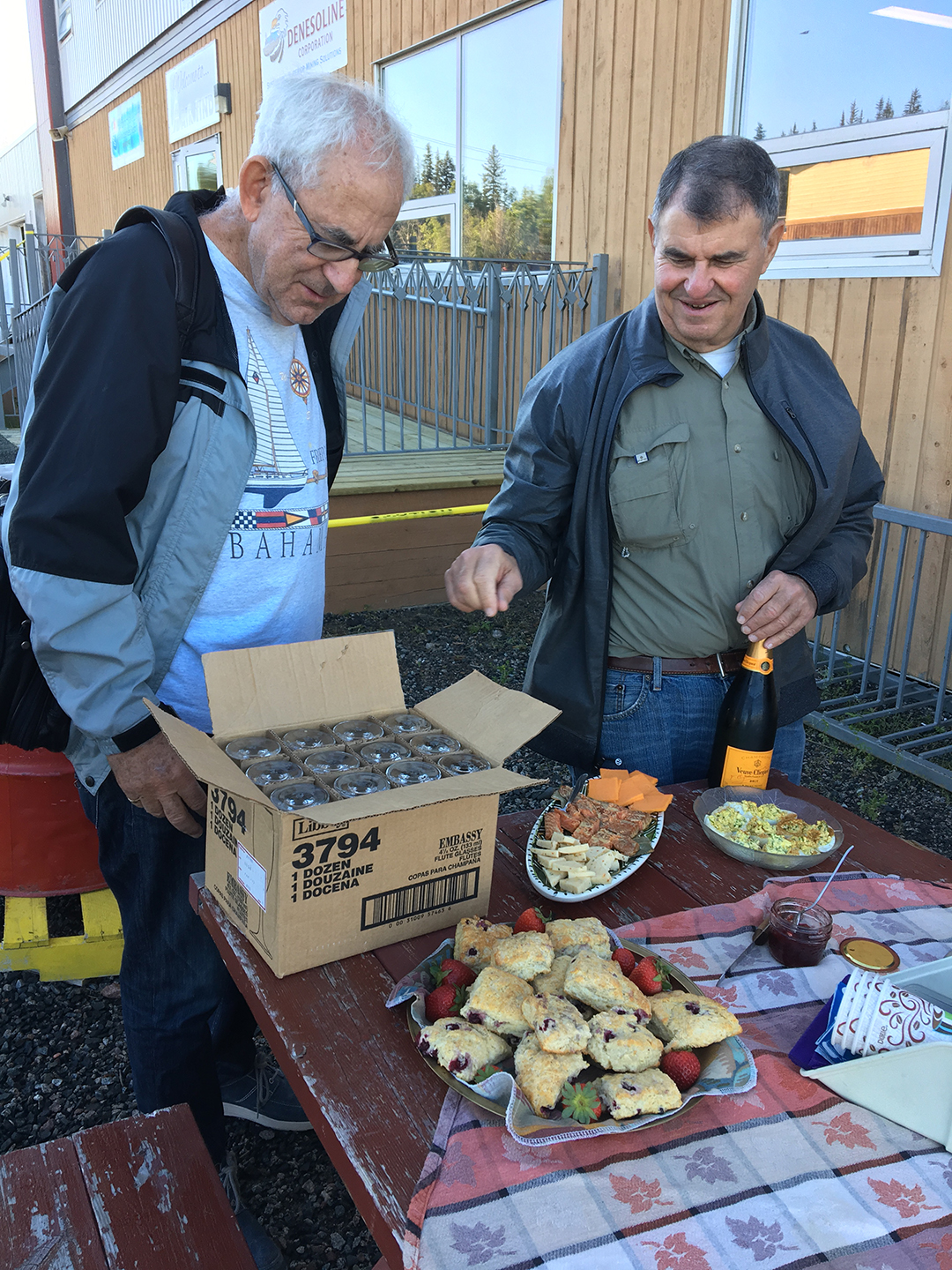 Alf and Steve at pre-flight breakfast

En route I read Sarah’s Key by Tatiana de Rosney. We were greeted at the dock by some familiar faces – Chad Peterson, Margaret’s son with a biblical beard, George from Texas who is here every year, and the guides, John, Jeff, Grant and Trent.

Unpacked our gear in the cabin (all three of us are on sleep apnea machines!) and made our way to the lodge (a communal dining room and lounge – on the wall is a white board on which your name is written if you catch a lake trout that’s 20 lbs or more).

Lunch, prepared by Tania the cook, was mushroom soup and sandwiches. Also staying here are two doctors from New Mexico, their colleague, a guy who rebuilds cars, and Jim from Wisconsin. After lunch to the boats to fish. A slow afternoon for me – only one fish – 15 lbs. It’s catch-and-release using barbless hooks. The mosquitoes and black fly are particularly vicious this year (my fifth time). 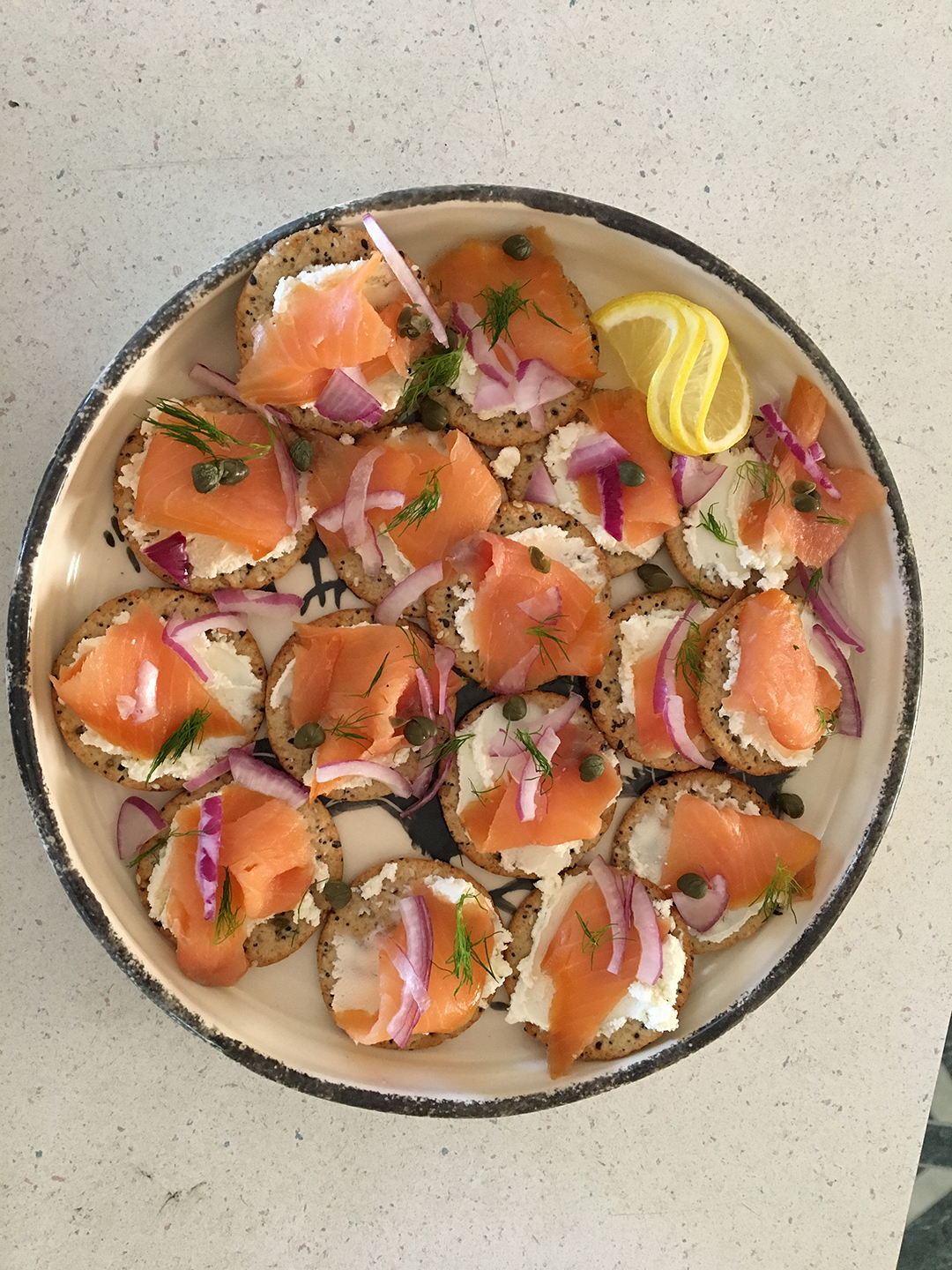 A Bloody Caesar before dinner with Nova Scotia smoked salmon. The menu: Steak, baked potatoes and mushrooms, salad and rhubarb crumble. We had brought a lot of wines for the trip. Tonight we opened Château de la Gardine Cuvée Tradition Châteauneuf-du-Pape 2013 and Luigi Bosca Malbec 2014.

Thursday, July 19th: Breakfast: Scrambled eggs, sausages and bannock. On the lake by 8:30 am. Got skunked in the morning, didn’t catch a fish but lost the leviathan of the lake when it broke my line. But the lake was gorgeous, as smooth as glass. 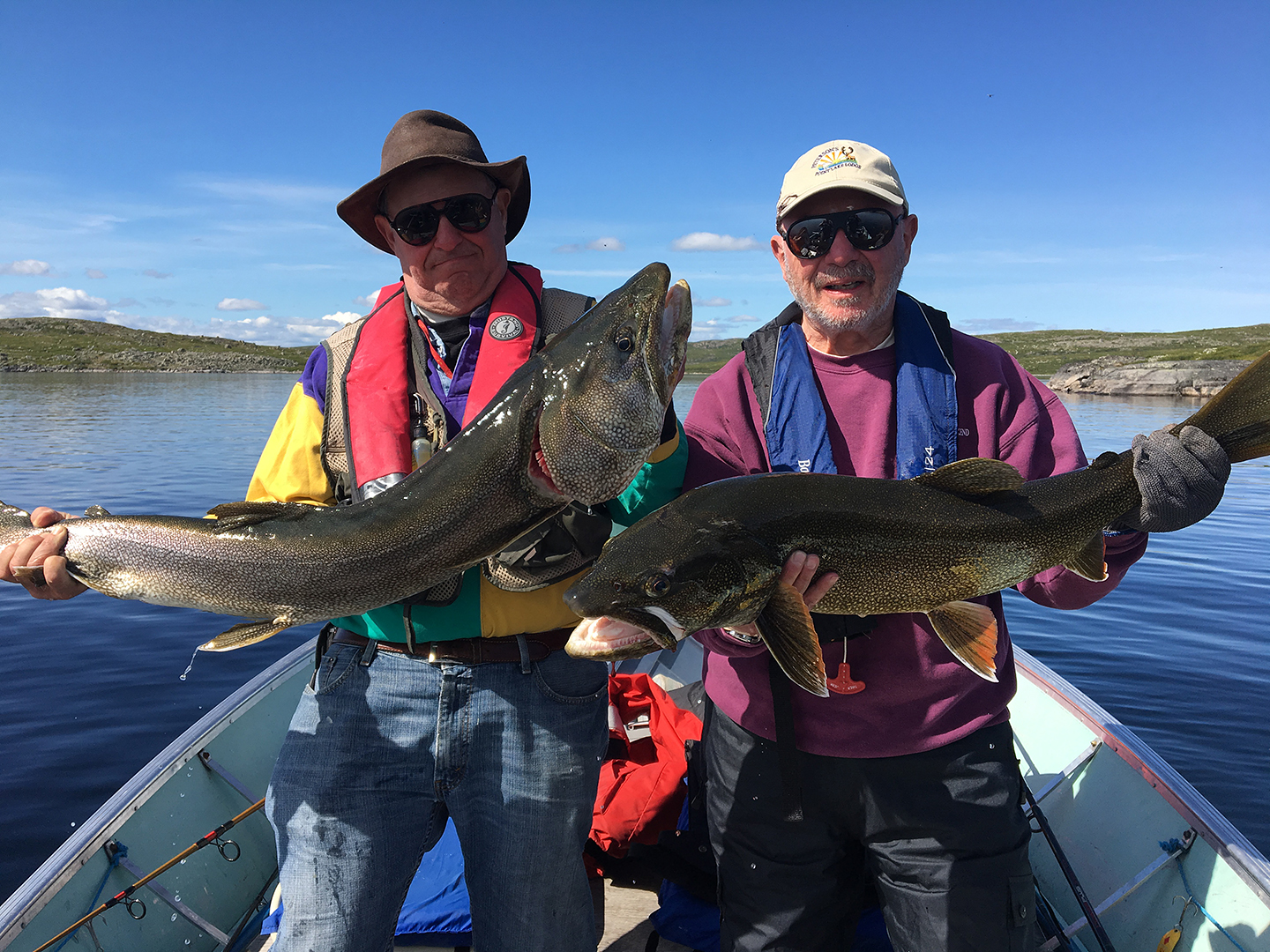 Steve’s and my double-header

Friday, July 20th: Awoke to big winds, which means it will be rough out on the lake. Breakfast: eggs and bacon.

In the afternoon I caught two small lakers and a 21-pounder (I’m on the board!). Dinner: Montreal smoked meat. Wines: Seghesio Zinfandel 2016 and Jim Barry Lodge Hill Shiraz 2015. 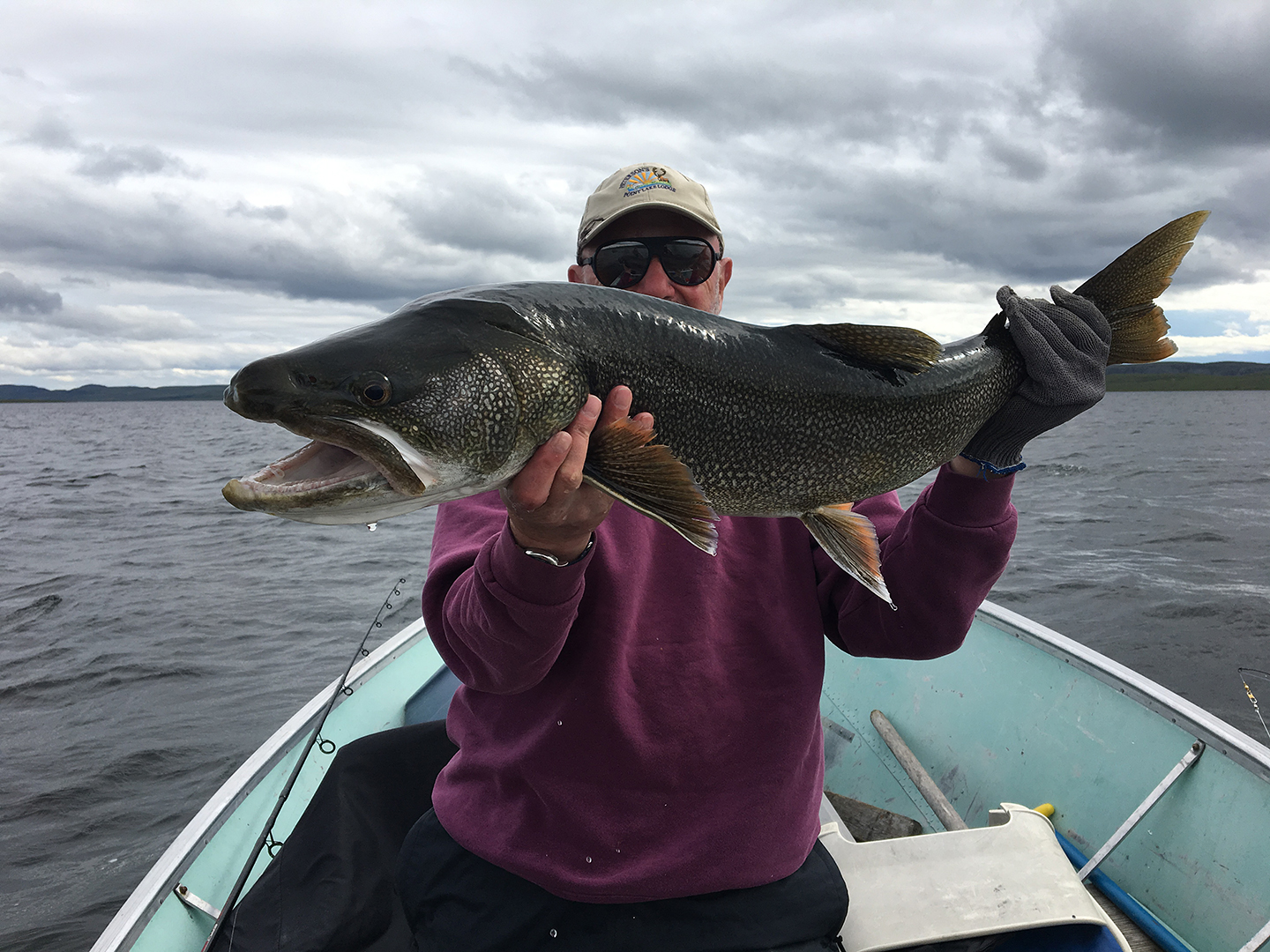 My 26-pounder now back in the lake

Saturday, July 21st: Breakfast: French toast and baloney. (Left the baloney.) The day started cold and windy with a rough crossing to our first fishing point. This morning I got skunked again. 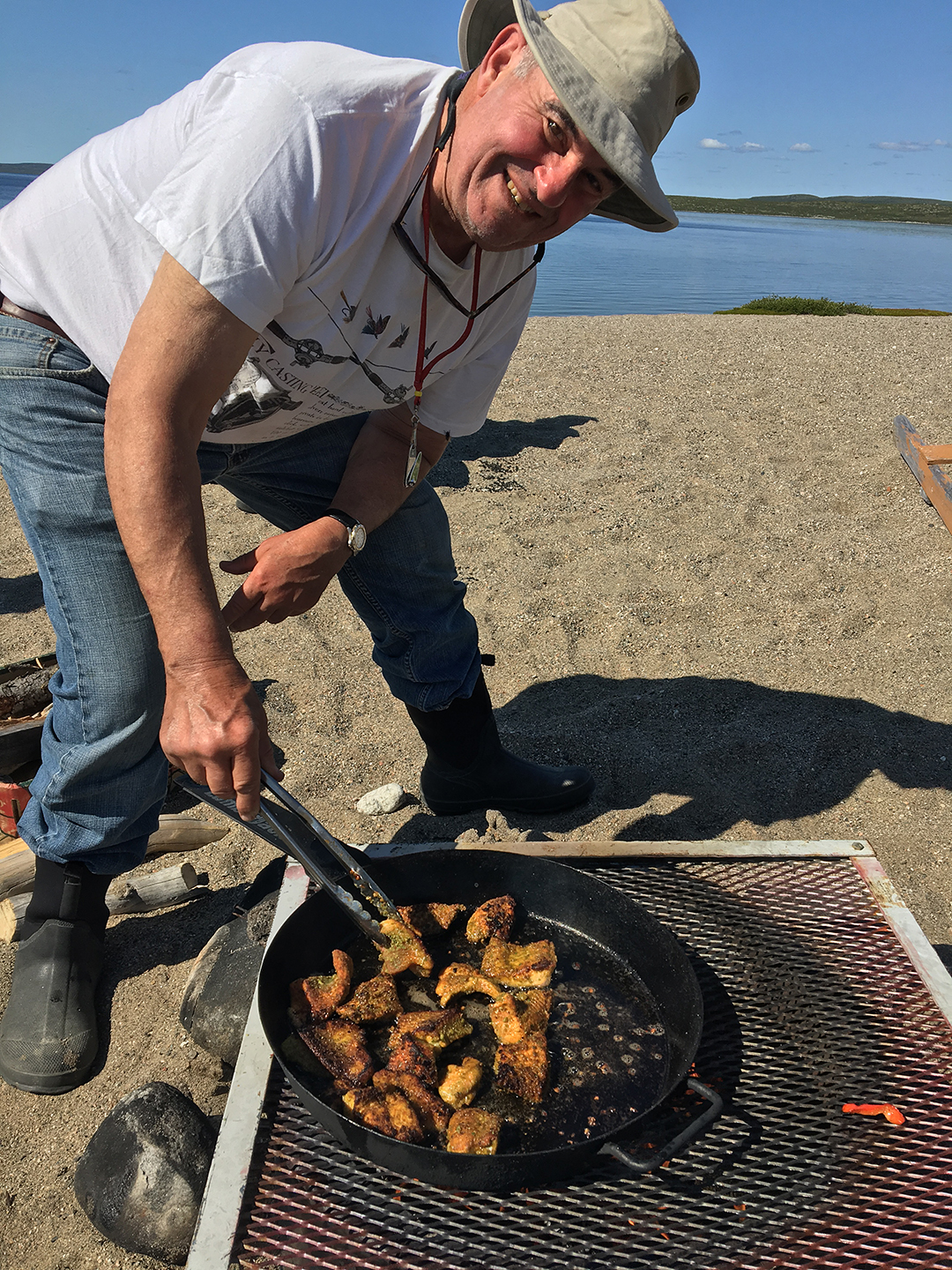 Steve’s shore lunch: Blackened fish and dirty rice. The wines: St. Clair Sauvignon Blanc 2017 and Stoneleigh Riesling 2015. In the afternoon the sun came out and the lake was like a millpond. Watched as my fishing partner Alfie kept pulling in fish and I caught nothing. Drowned my sorrows in a a glass of Highland Park 7-Year-Old Malt Whisky. Dinner: Moose lasagne with salad, apple pie and pecan pie. The wine: Spy Valley Pinot Noir 2015.

A ptarmigan comes to visit 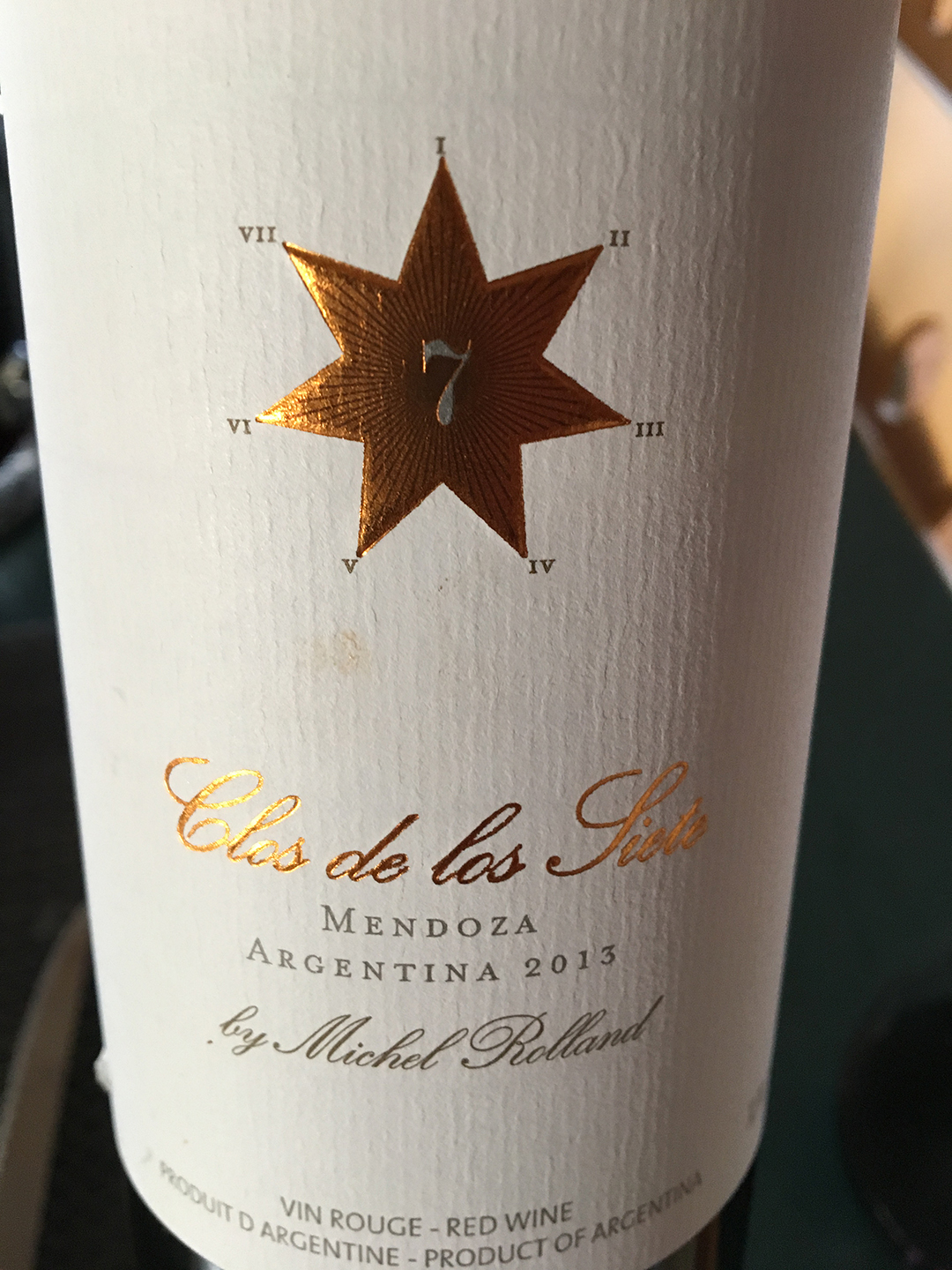 After lunch I hooked a 25 lb trout but lost it at the boat. Dinner: Roast beef, potatoes, cauliflower. The wine: Clos de los Siete 2015 and Taylor Fladgate Quinta de Vargellas 1991, which I decanted into a Budweiser jug through cheesecloth.

Monday, July 23rd: Breakfast: Pancakes and bacon with maple syrup. The gods of fishing smiled on me this morning: first fish was 26 lbs, followed by two 15 lbs and three smaller ones. Had two double-headers with Alfie. 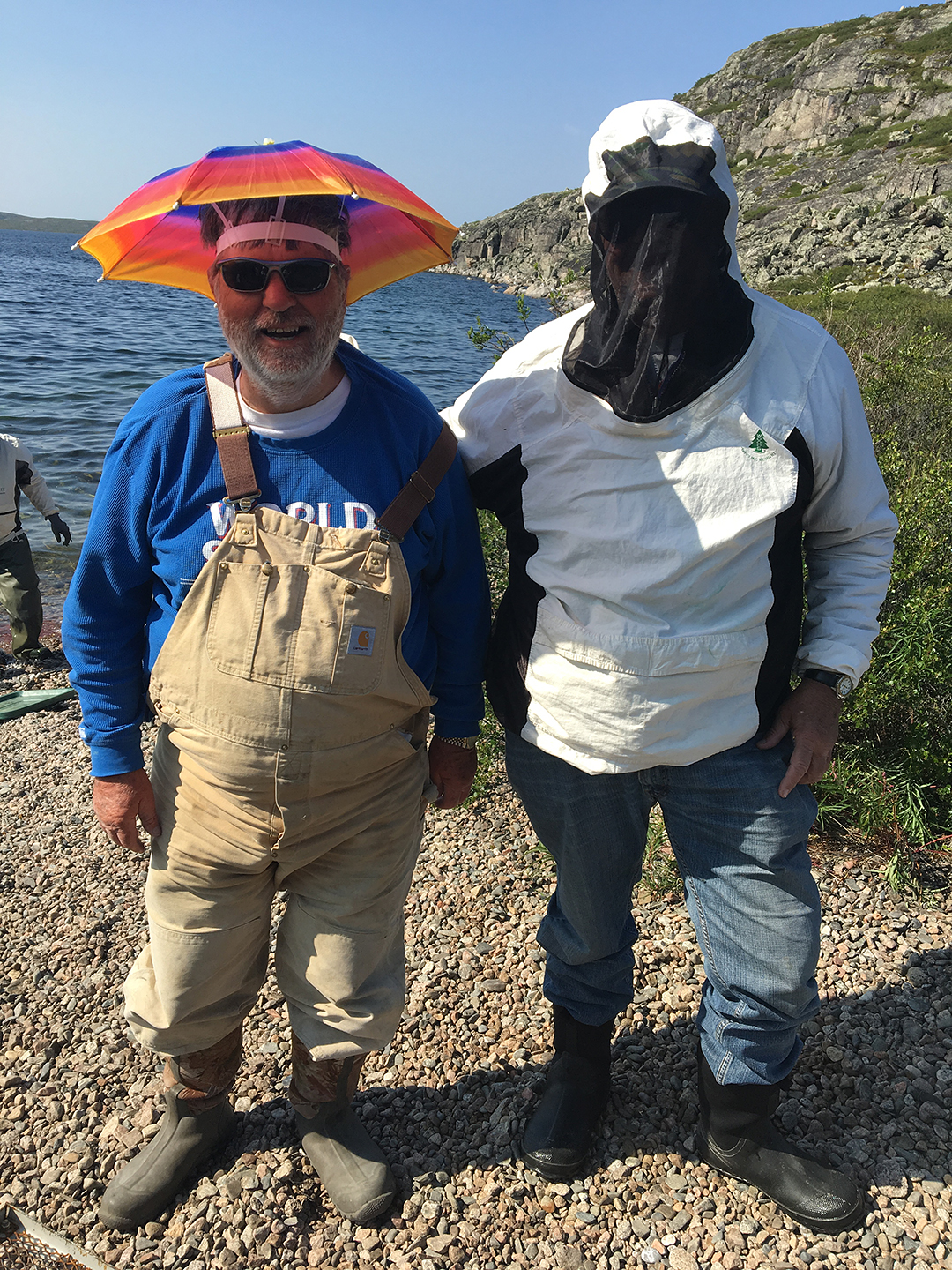 George and Alf relax after a hard morning’s fishing

Steve’s shore lunch: Wasabi-encrusted fish with Chinese noodles. The wines: Fetzer Gewurztraminer 2013 and Conundrum 2015. In the afternoon I caught a 20 lb, a 12 lb and a “shaker” (a small fish).

Dinner: BBQ chicken breast with morels and egg noodles and Greek salad. Dessert: Rhubarb squares. The wine: Schug Pinot Noir 2016 and the rest of the port with Stilton. It was Jim’s birthday today and Tania baked him a cake. 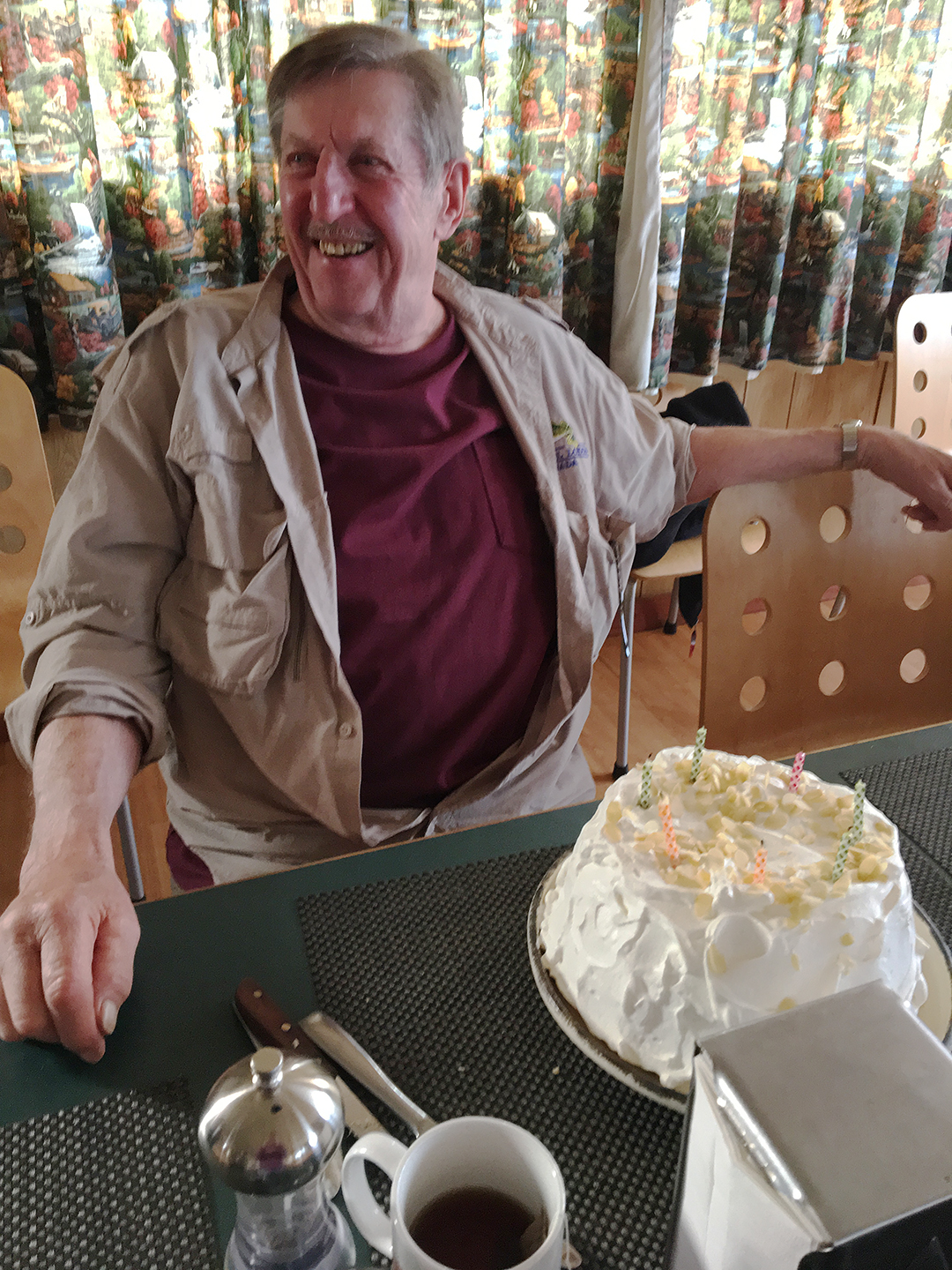 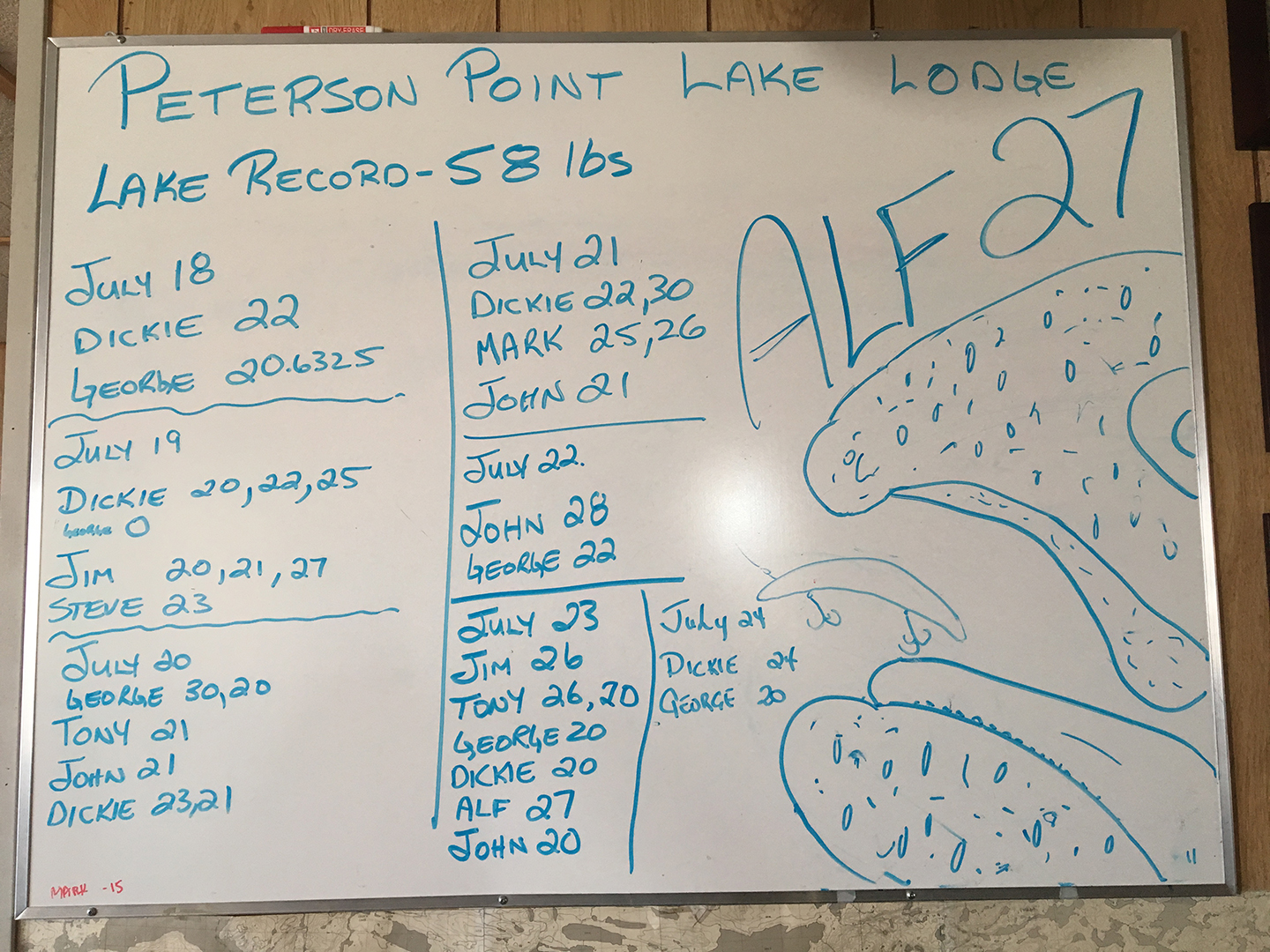 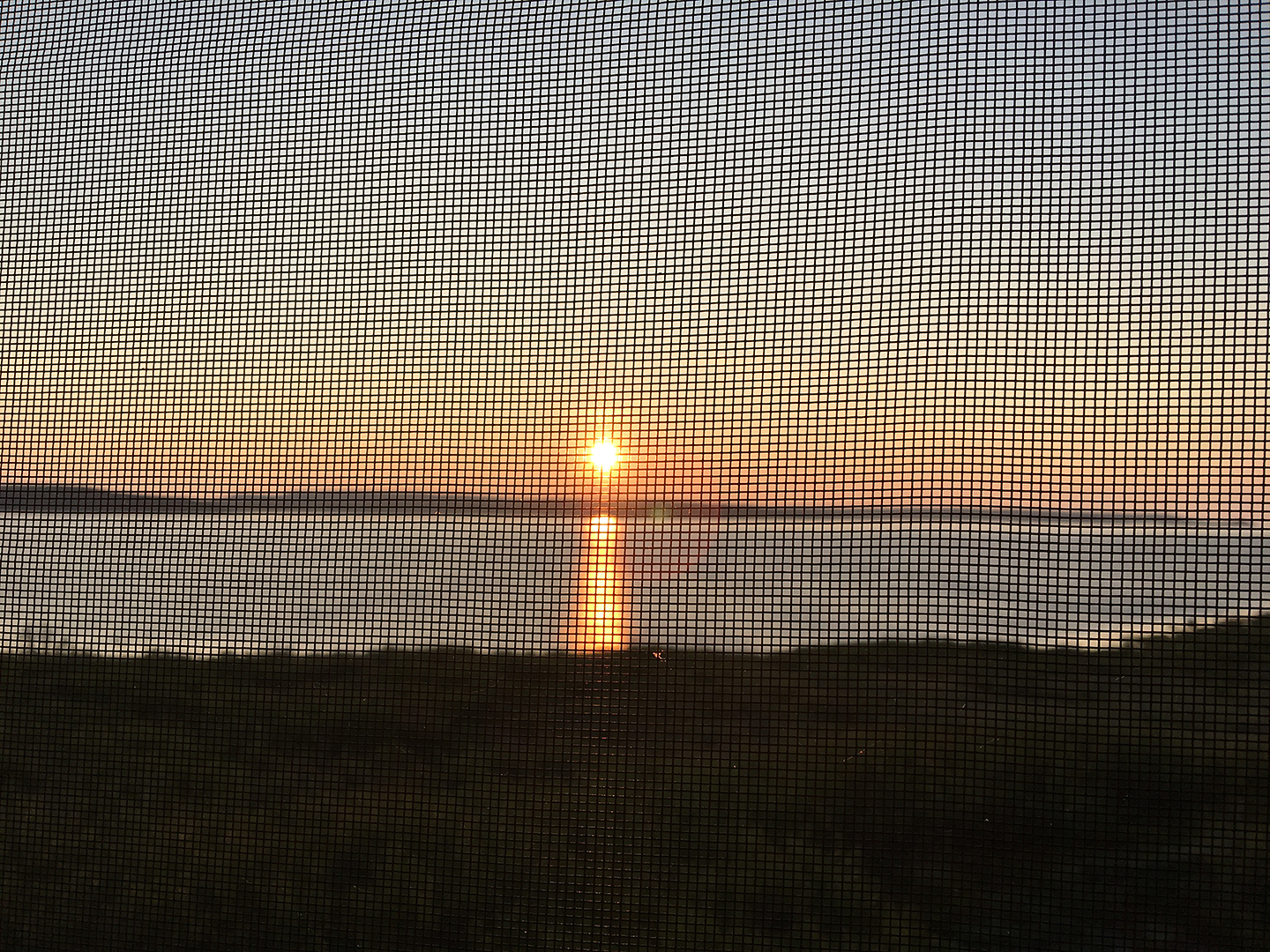 Wednesday, July 25th: After breakfast, cleaned up the cabin, finished packing and waited for the float plane to take us back to Yellowknife. A very satisfactory week. 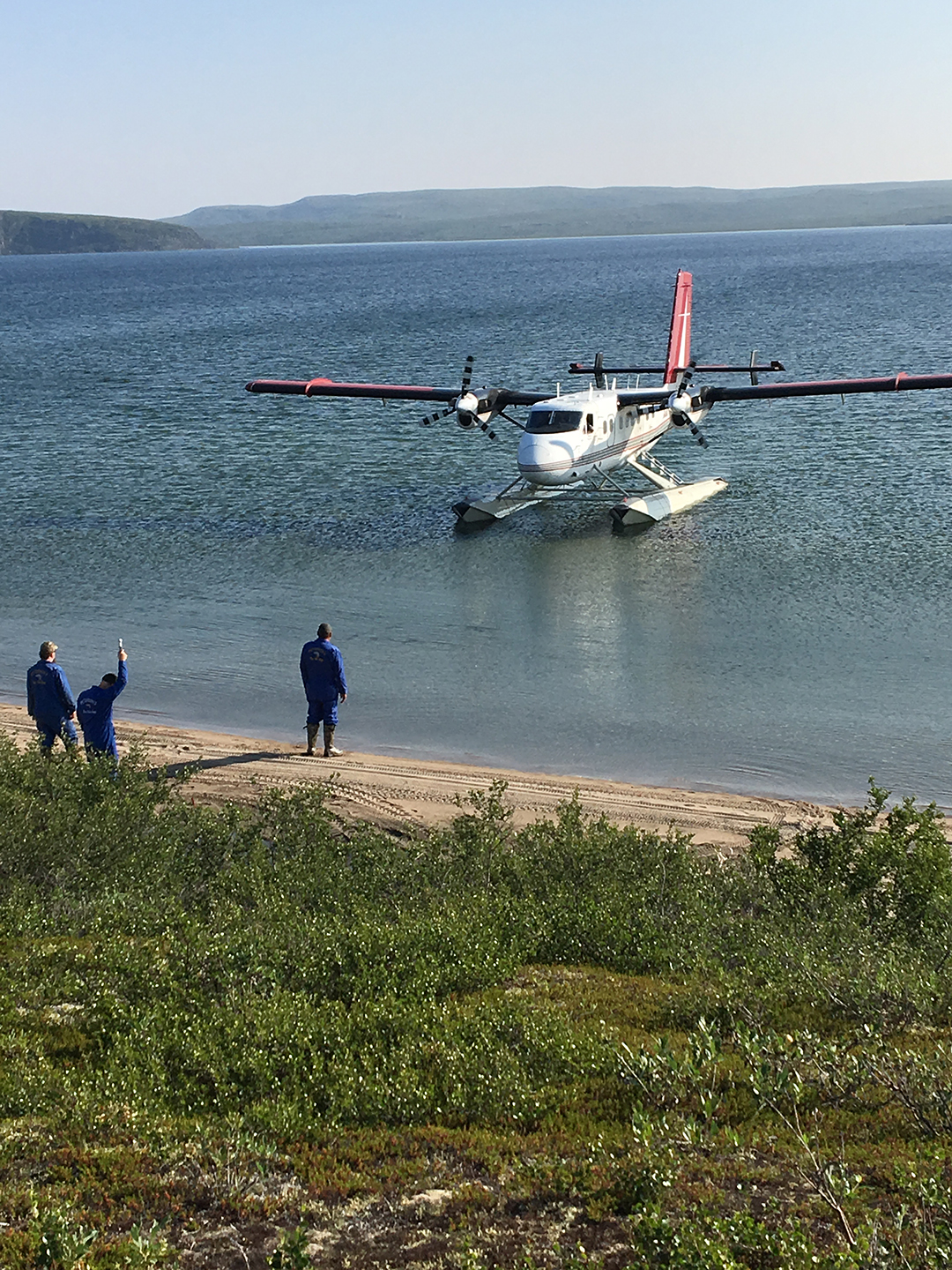