Thursday, May 17: Moira and Martin Malivoire ordered a car for the airport which picked us up first. An Air France flight overnight to Paris. At Charles de Gaulle Airport we had a couple of hours layover before our flight to Nantes. At Paul bakery I ordered coffee and croissants, which restored my faith in humanity. (The croissants were amazing.)

Friday, May 18: Early afternoon arrival in the Atlantic seaport of Nantes, where our deluxe private coach was waiting to take our group to the Radisson Blu Hotel, our base for the next three nights. The hotel is in a former courthouse, ideally situated in the city centre. 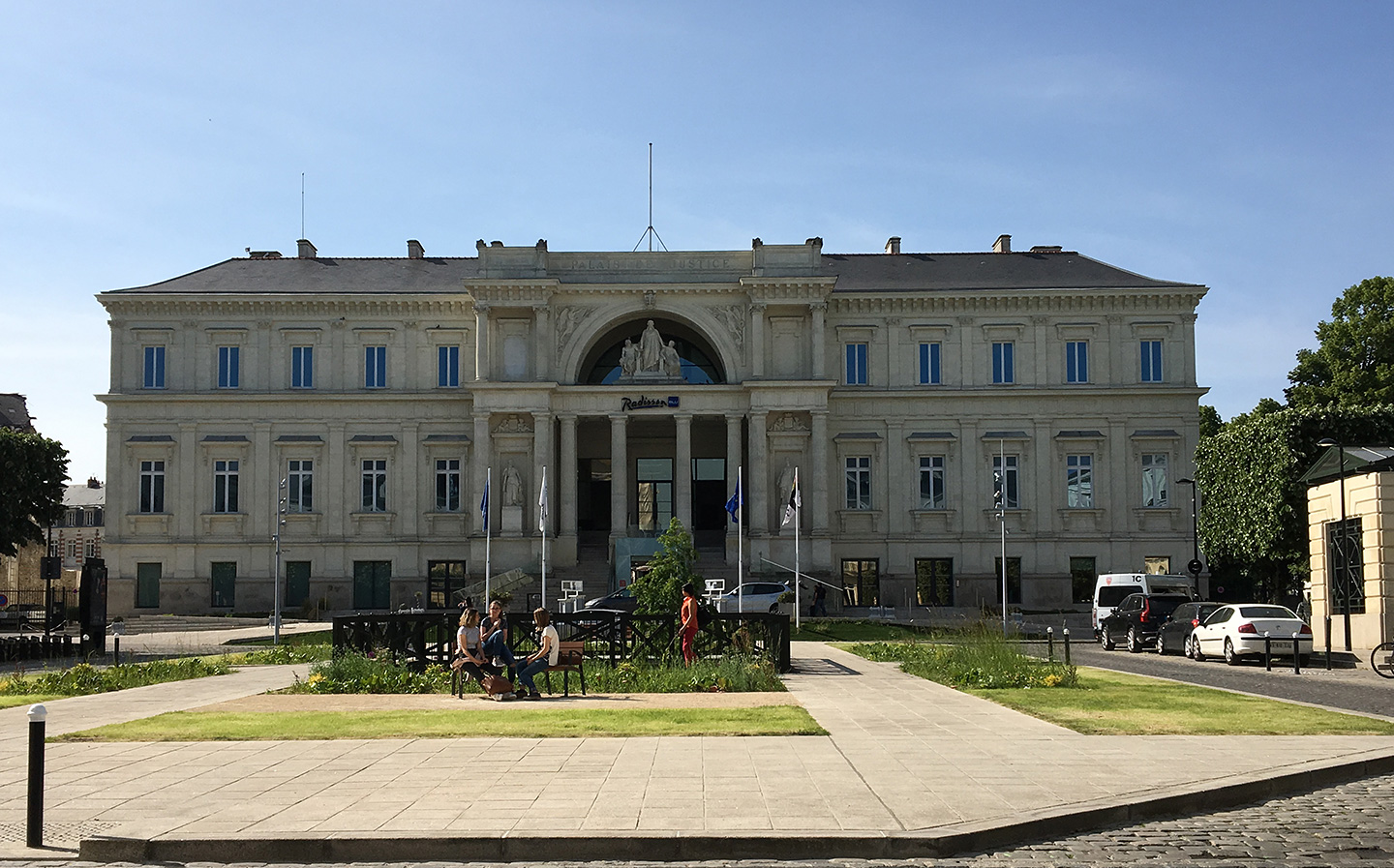 A welcoming glass of Langlois Brut Crémant de Loire Brut. Then Martin, Deborah and I repaired to Bastide Bistrot across the road from the hotel for lunch: 18 oysters, foie gras de Canard with a bottle of Domaine Brégeon Muscadet Sèvre et Maine sur lie 2015. Other members of the group joined us at another table and we swapped our bottle for their bottle of Domaine Ogereau Clos Le Grand Beaupréau Savennières Chenin 2015.

Had a brief nap before joining the group at 6:30 pm for a drink in the outdoor patio (the same Crémant as we had earlier in the day). Then we walked ten minutes to our welcome dinner at the beautifully tile-covered brasserie La Cigale in city’s main square, Place Graslin. On the walk we passed a shop in an arcade (rather like London’s Burlington Arcade) that sold very colourful shirts. I entered and asked the owner if I could take a photo of the shirts neatly stacked up in shelves. He said no, but I could take a photo outside. So French…

Shirt shop I could only photograph from outside

As an amuse-gueule we had a spoonful of avocado mousse decorated with a shrimp accompanied by a glass of Billecart-Salmon Réserve Brut Champagne. Our first course was an enormous plate of seafood served with Pierre Alexandre Clément Menetou-Salon 2015, a stunningly delicious Sauvignon Blanc. Main course, rack of lamb with mashed potatoes. The accompanying wine: Catherine & Pierre Breton Nuits d’Ivresse Bourgueil 2015. Dessert: pink grapefruit sections on a round of meringue. And so to bed.

Saturday, May 19: After breakfast, a 90-minute guided sightseeing tour of Nantes on foot. The city has fascinating history and was at one time the wealthiest port in France owing to its active role in the trade in sugar, rum – and slaves. Our guide took us to Le Passage Pommeraye, a covered shopping arcade on three levels (where I saw the shirt shop), built 1840–1843 by Louis Pommeraye, a property developer who went bankrupt in the process. According to Wikipedia, “The Passage Pommeraye is a passage between two streets, the rue Santeuil and rue de la Fosse, with one 9.40 m higher than the other. Midway, there is a flight of steps and the mall then continues on another floor.”

Then onto the bus to drive to Domaine Luneau-Papin (3, La Grange 44430 Le Landreau). Here Marie Luneau, the ninth generation of the family, toured us around the La Grange vineyard before pouring us the following wines:

One of three desserts

Returning to the hotel and then downtown to shop. Had dinner with Martin, Moira and Helen at L’Oceanide (tried to book La Poissonière – below Jules Verne’s apartment – but it was fully booked.) Got somewhat lost walking to the restaurant trying to follow a map the hotel had given us. The wine list has a lot of “new” wines. The woman sommelier talked us in to having Marc Pesnot Chapeau Melon de Bourgogne 2015, a pet-nat wine that tasted like cider. Ordered a bottle of Jerome Bretandeau La Justice Chardonnay 2015. Martin ordered foie gras for the table while we waited for our food to arrive. I had six oysters and sea bass followed by a cheese plate. Final wine: Domaine Giberteau Les Moulins 2015, a Saumur Cabernet Franc.

Sunday, May 20: Didn’t get a wakeup call and had to rush to catch the 8:30 am bus. Today we explored the mouth of the Loire River and ventured north into neighbouring Brittany along the coast of the Bay of Biscay. First stop, the town of Guérande, famous for its perfectly preserved medieval ramparts and as the source of Fleur de Sel de Guérande sea salt.

Back on the bus, Martin produced a bottle of Pierre Luneau-Papin Brut, which we drank out of paper cups. Drove on to the coastal town of Vannes, overlooking the Gulf of Morbihan. Sat in a café by the harbour in brilliant sunshine and ordered a bottle of Vincent Caillé Fief des Coteaux Muscadet Sèvre et Maine 2016. Back on the bus, Martin produced two bottles of Caveau du Muscadet Perles de Folles Brut, which again we consumed from paper cups. 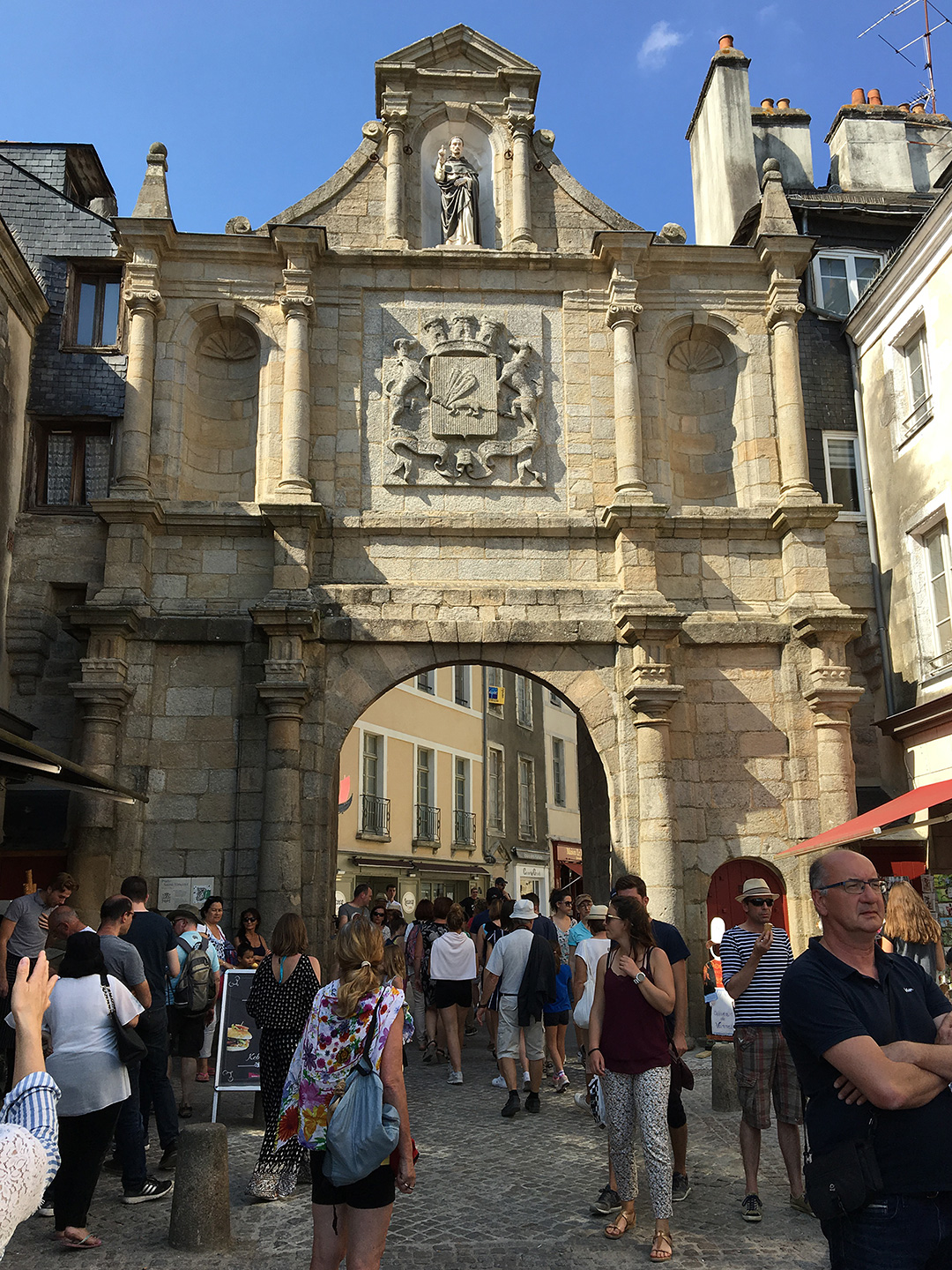 Monday, May 21: After breakfast, set off for a tasting and lunch at Le Domaine FL, whose prime vineyards span several of the Anjou sub-appellations of Saviennières, Coteaux du Layon and Quarts de Chaume. Greeted by winemaker Julien Fournier with a glass of Domaine FL La Frémine Savennières 2015 as we toured the winery before lunch.

After lunch we had a private guided tour of Fontevraud Abbey, the largest monastic complex in Europe. This is the burial place of several Plantagenet rulers of England and various French duchies, including Henry II, Richard the Lionheart and Eleanor of Aquitaine – the lids of whose sarcophagi were laid out in the nave. Our guide told us that the tufa stone quarried to build the churches and chateaux of the Loire have created some 1500 kilometers of underground tunnels which are now used as wine cellars and for growing mushrooms.

Sarcophagi of Henry II and Eleanor of Aquitaine

Drove to the town of Vouvray and our base for the next three evenings, Domaine des Hautes Roches, a Relais & Chateaux Hotel whose “troglodyte” rooms have been carved into the chalk-like tufa stone of the area. Our group has taken over the entire hotel. The chef created a spectacular buffet for our dinner, which we consumed with gusto and several bottles of Denis Breussin Vouvray Sec 2015 and Christophe Baudry Amarante Chinon 2016.

Tuesday, May 22: This morning we visited two of the region’s famed chateaux. Our first visit is Château de Chenonceau, arguably the most beautiful of the entire Loire Valley, built like a bridge across the Cher River.

What you can’t do at Château Chenonceau

The second, perched high above the banks of the Loire, is Château d’Amboise, the grand 15th-century residence of King Charles VIII, featuring Leonardo da Vinci’s tomb. Lunched in Amboise at La Réserve under the shadow of the chateau. Ordered a bottle of Plaimont Rosé d’Enfer 2016.

After lunch we drove back to Vouvray to visit Domaine des Aubuisières, a top regional producer of superb, mineral-rich Vouvray Chenin Blanc wines in every style. The owner/winemaker, Bernard Fouquet, generously poured seven of his spectacular wines:

Back to the hotel to prepare for dinner. Our special guest for tonight’s gourmet dinner at the Michelin-starred restaurant is Florent Baumard, owner of Domaine des Baumard, who has bought along a range of his Anjou wines to enjoy with the meal.

Wednesday, May 23: This morning we visited the central Loire AC of Chinon, which takes its name from the small, historic town on the banks of the Vienne. While some chenin blanc whites are made here, this is the Loire’s red wine country, produced from cabernet franc. Producers usually offer at least two different bottlings, a vin de soif (thirst quenching wine) made from younger vines and/or soils rich in clay and chalk, and a second, more structured, barrel-aged red which can attain the highest expression of the cabernet franc grape.

A white wine from Cabernet Franc

We visited Domaine Couly-Duthiel, one of the leading local producers, and then had some free time for lunch in Chinon. Following lunch, we had a special tasting of a variety of central Loire AC wines from specially selected regional producers at the Cabane à Vin boutique in Chinon, including those of Bernard Baudry. The shop is owned by Quebecker Emilie Riopel. We had an afternoon visit to the stunning Château de Villandry and a late afternoon return to the hotel.

The gardens of Château Villandry

Thursday, May 24: After breakfast, we travelled east to the Upper Loire wine region, where the famous dry white wines Sancerre and Pouilly-Fumé are produced from sauvignon blanc. We had a tour and tasting visit at Domaine Alphonse Mellot. It was Alphonse’s 71st birthday today. His family have been making wine for nineteen generations. The winery celebrated its 500th anniversary in 2013. To mark the occasion, Alphonse bought a 2000-litre egg made of oak.

After touring the 16th and 17th century cellars, we tasted the following wines, all absolutely delicious: 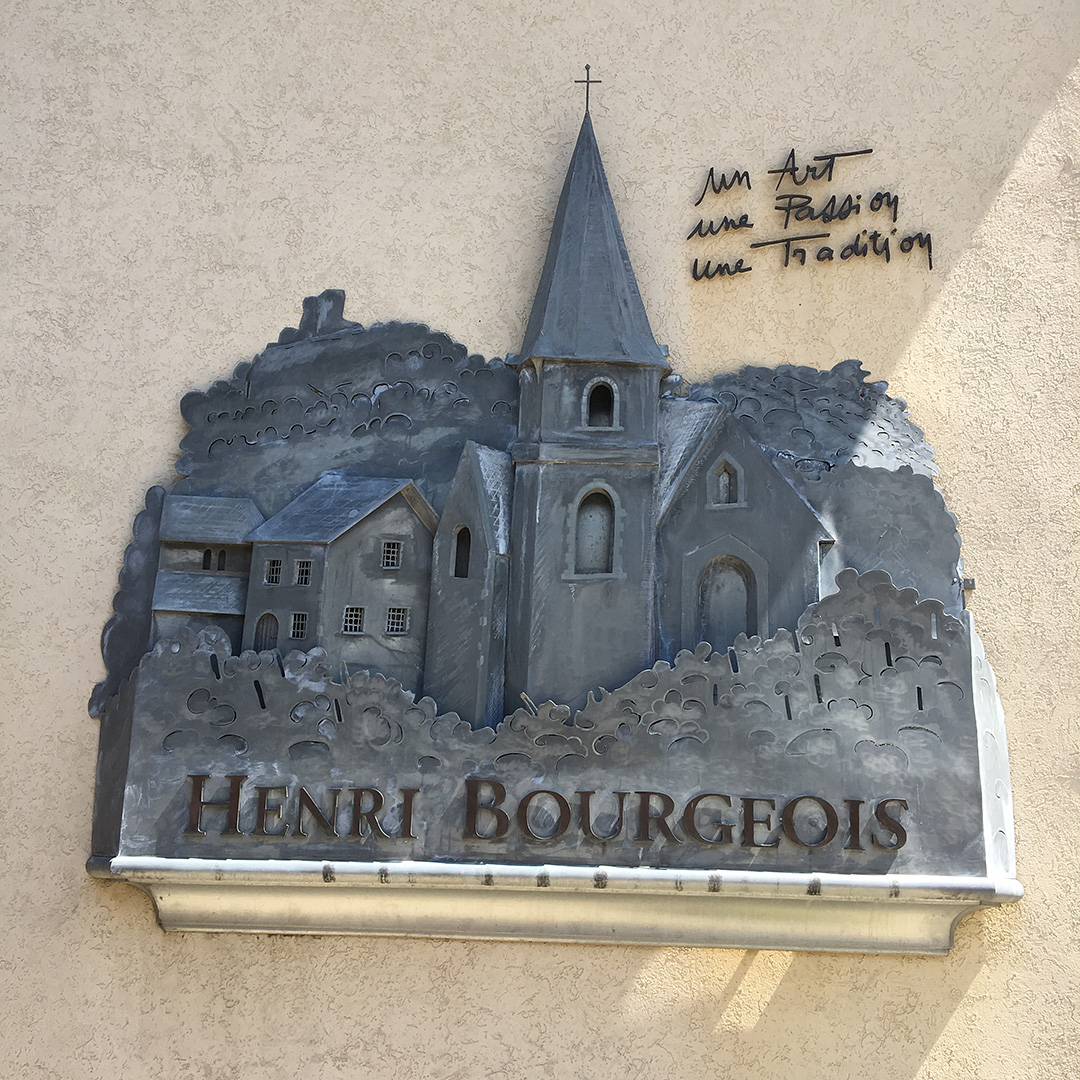 Our second visit this afternoon was to Henri Bourgeois in Chavignol. Toured the old cellars. Henri Bourgeois started in 1935 with 2 hectares of vines. They now have 72 hectares and produce one million bottles annually. Started the tasting with a simple Vin de pays – Henri Bourgeois Petit Bourgeois 2017. Then:

Back to the hotel – Chateau de Augerville – where we dined outdoors. A glass of Bouvet Saphir Saumur Brut 2014 on the terrace before dinner.

Friday, May 25: The bus dropped us in Fontainbleau and we wandered around the shops before going to lunch at the Michelin-starred restaurant L’Axel (43 rue de France), conveniently opposite a store that sold only champagne. An amazing lunch which started with a Kir Royale made with pink grapefruit juice. Château Beychevelle’s Grand Bateau 2017 (100% Sauvignon Blanc) with a starter of green pea puree with foam and shrimps, then white asparagus with summer truffle, egg and foie gras, pork loin with Moulin de Gassac Guilhem 2017, goat cheese mousse. Two desserts: Earl Grey jelly with ice cream and peach foam, then raspberry mousse and chocolate.

After lunch we toured the spectacular Château de Fontainebleau, one of the largest French royal châteaux. The medieval castle and subsequent palace served as a residence for the French monarchs from Louis VII to Napoleon III. 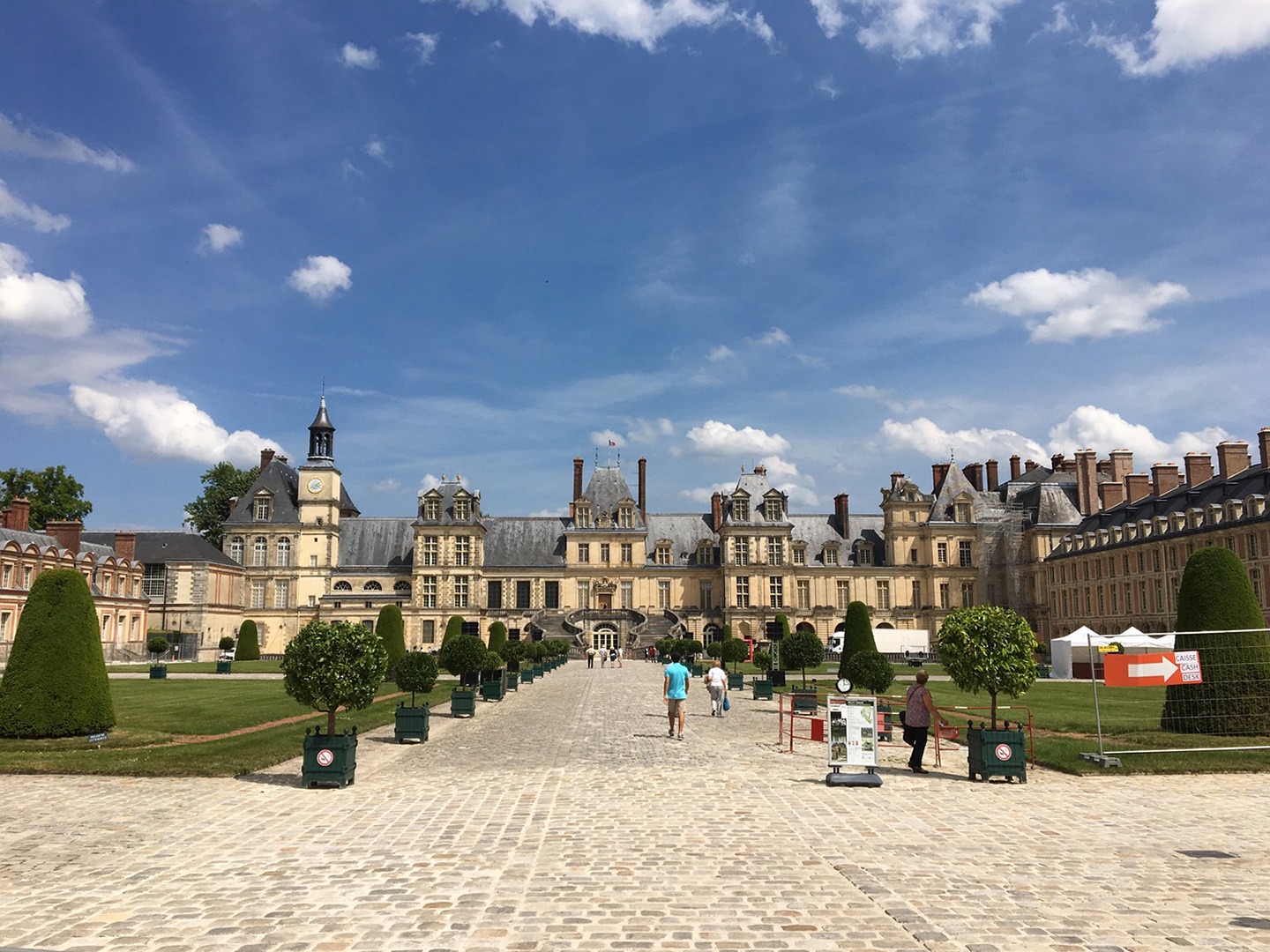 Back at the hotel we dined on the terrace with wines we had acquired along the way – until the rain drove us inside. 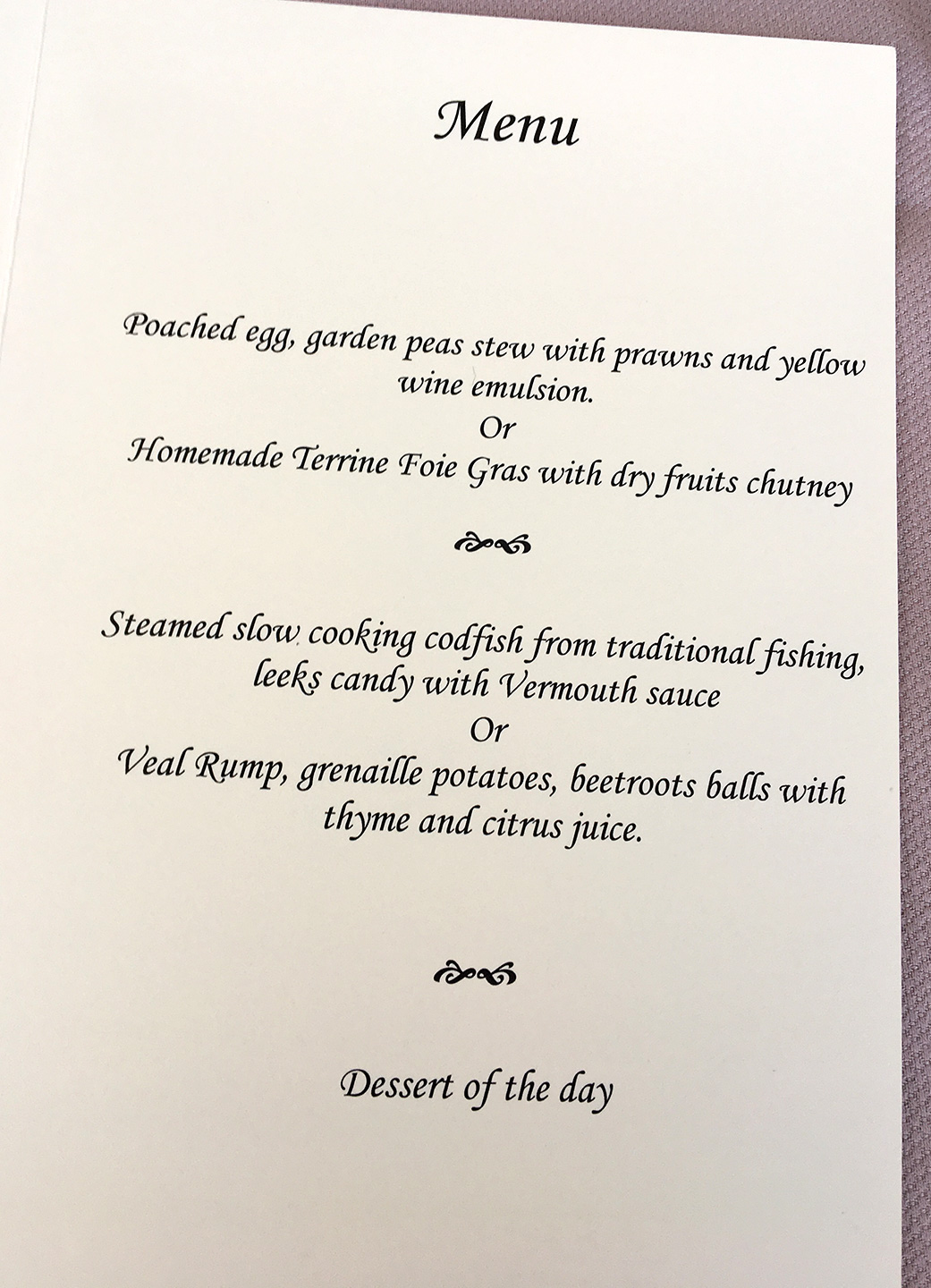 Saturday, May 26: After breakfast, transfer to Paris Charles de Gaulle Airport in time for our early afternoon return flight to Canada. Pure chaos at the airport.